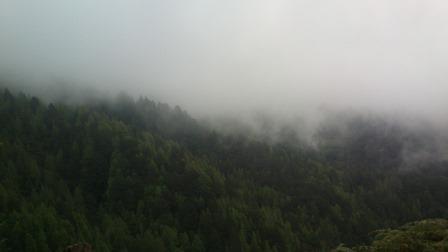 The total area saved comprises two properties. Funds for the purchase were donated by Puro with a contribution from the local water boards.

Once the purchases are complete, the Municipality of San Marcos Ocotepeque will own the land title.

The municipality and AESMO will then implement a management plan to conserve the biodiversity and watersheds of the Volcán Pacayita Reserve. The community water boards of San Juan and La Tejera are supporting the management plan, which includes employing a ranger and a coordinator for the Environmental Municipal Unit.

To complement conservation measures in Volcán Pacayita Reserve, AESMO plans to develop an environmental education programme with the local communities and in coordination with the municipality.

AESMO recommended the site as a priority purchase because it is an important first step towards establishing the Pital-Celaque sub corridor within the larger Montecristo Corridor, which includes other sub corridors in Honduras, El Salvador and Guatemala.

Biodiversity in Volcán Pacayita Reserve is particularly threatened by the illegal extraction of plants, timber and wildlife.

Agriculture is expanding and the number of grazing dairy cattle is increasing, which erodes the forest and contaminates soils and water. Roads and settlements are also spreading, and until now there have been no municipal protected areas or management agreements.

The purchase and longterm protection of this property will halt any further fragmentation of the forest, and allow degraded areas to regenerate naturally. It will also contribute to the wider conservation efforts within the Trifinio Region, the tri-border area of three countries: Guatemala, El Salvador and Honduras.

The reserve will provide a haven for rare and endemic birds such as the Resplendent Quetzal (Pharomachrus mocinno), which is listed as Near Threatened on the IUCN Red List, Plain Chachalaca (Ortalis vetula) and Sharp-shinned Hawk (Accipiter striatus).

Mammals include Oncilla or Tiger Cat (Leopardus tigrinus), which is listed as Vulnerable on the IUCN Red List, and Pacayita Reserve provides good habitat for one of the few Puma (Felis concolor) populations found in western Honduras.

The venomous Pit Viper (Atropoides species, probably Atropoides nummifer) is also present and it is likely that the rare Guatemalan Spikethumb Frog (Plectrohyla guatemalensis), listed as Critically Endangered on the IUCN Red List, may also be found within the Volcán Pacayita Reserve. Due to the lack of biological surveys, it is likely that these forests contain many other vulnerable species, particularly amphibians.

Note: This page has been updated since it was first published in March 2014. Due to mapping revisions, the figure for the total area purchased and protected has been adjusted. The page was revised and republished on 17 December 2014.

WLT supports conservation in Honduras with funding for a ranger – Carlos Ardón – through the Keepers of the Wild appeal. News from Carlos »

The photograph of Geoffroy’s Spider Monkey by Anton Ivanov is courtesy of www.shutterstock.com.