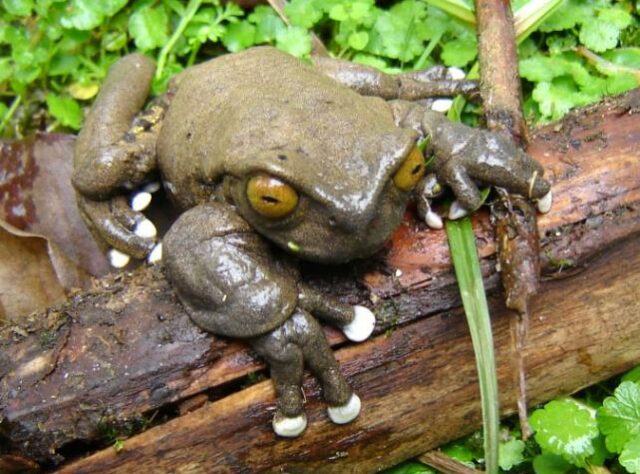 A fruitful collaboration between two of World Land Trust’s (WLT) partners in Ecuador has inspired the publication of a detailed inventory of amphibian and reptile species.

The study is a result of the combined efforts of Fundación Jocotoco (Jocotoco) and Fundación Ecominga (Ecominga) – two of WLT’s four partners in Ecuador – and the Ecuadorian Museum of Natural Sciences (MECN).

The book, titled Herpetofauna in priority conservation areas: the Jocotoco and Ecominga reserve system, is a remarkable achievement. It is the result of extensive surveys of 14 reserves owned and managed by the two conservation organisations.

The surveys have been carried out since 2004 by MECN biologists with help from staff of the two foundations, deep in the Andean cloud forests. Their studies have led to the discovery of several species new to science.

The survival of Ecuador’s astonishing biodiversity depends on the conservation of distinctive natural habitats and the book underscores the importance of continuing to protect the network of reserves created and managed by Jocotoco and Ecominga.

These reserves have been established, enlarged and improved by restoration of degraded areas over the past 15 years with a primary focus on providing habitat for threated and endemic species of birds and orchids.

Now, though, the findings of these surveys confirm that the reserves are equally important for the amphibian and reptile diversity within them. In the past 10 years the number of frog species recorded in Ecuador has increased by about 100 to 520, but the threats to survival of amphibians in the Neotropics have also increased dramatically due to habitat loss and spread of disease.

The study of amphibian and reptile ecology is extremely valuable – research has shown that these species demonstrate reproductive, structural, and ecological adaptations which provide a deeper understanding of biological processes and evolution. However if the loss of habitat and species continues, this potential for scientific knowledge will be lost.

WLT Patron Sir David Attenborough has praised the publication and looks forward to seeing the results of more surveys in future. “It is to be hoped that this remarkable book will set an example for successive volumes that will survey all the other major groups of animals for which these Jocotoco and Ecominga reserves are such a valuable refuge,” said Sir David.

Read a review of the book »