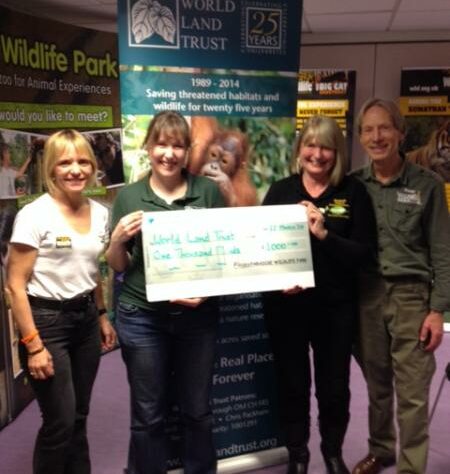 Paradise Wildlife Park (PWP) in Broxbourne, has donated £1,000 for BIAZA Buy an Acre, an initiative to raise funds for land purchase in Mexico in partnership with World Land Trust (WLT).

The cheque for £1,000 was presented on Saturday 22 March. Kelly Jacobs, WLT Education, Outreach & Training Manager received the donation on behalf of WLT at an evening presentation for staff and Friends of PWP.

Earlier in the day Kelly spent time in the wildlife park, talking to visitors, and raising awareness of WLT’s conservation partnership with PWP.

At the evening event Peter Sampson, founder of PWP, spoke passionately about the need to conserve habitats. “There is no point in zoos managing and preserving endangered species if there is nowhere for them to live in the wild,” said Peter, who is also the founder of Wildlife Heritage Foundation, based at the Big Cat Sanctuary in Kent.

Following her presentation about WLT, Kelly took questions from the audience. Afterwards there were informal conversations about the importance of conservation work on a small scale and the individual action that we all can take to protect biodiversity.

“It was encouraging to be able to talk to the keepers that hadn’t managed to stop at the WLT stall in the park during the day, and it was good to be able to answer key questions such as how WLT can be sure that funds sent for conservation projects overseas are spent appropriately,” said Kelly. “As for the donation, that was a great surprise, and a significant contribution to BIAZA Buy an Acre.”

PWP has supported WLT since 2006 when WLT first formed a relationship with the British and Irish Association of Zoos and Aquariums (BIAZA). In 2007 Friends of PWP made their first donation, towards purchasing a property in the Atlantic Rainforest in Brazil, now the BIAZA Reserve.

Since then PWP’s Friends, staff, volunteers and visitors have been staunch supporters of WLT. They donated to the BIAZA Keepers of the Wild project to pay the salaries of rangers patrolling reserves supported by WLT, and in 2013 intrepid keepers from PWP’s Paddocks Section bungee jumped to raise more than £2,500 to save land in Ecuador.

BIAZA, has been supporting World Land Trust since 2006. In 2014 BIAZA and its members launched BIAZA Buy an Acre with the aim of raising £10,000 to safeguard 100 acres of land in Sierra Gorda, Mexico, in partnership with WLT and WLT’s Mexican partner Grupo Ecológico Sierra Gorda (GESG).

BIAZA staff step up to the Chilli Challenge »