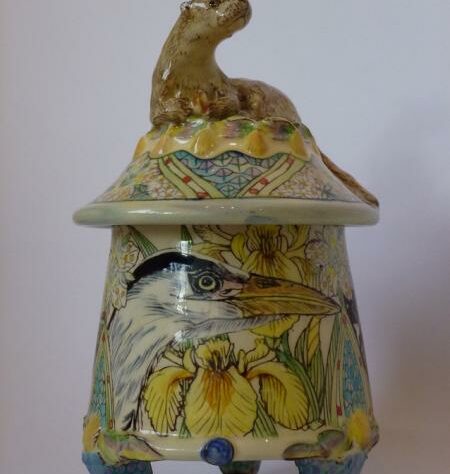 A lidded pot by Maureen Minchin has been sold to a private collector, raising £450 to support land purchase in Bolivia’s Beni savanna.

Maureen is a long standing supporter or World Land Trust (WLT) with connections to the Waveney Valley in Suffolk, where WLT has offices.

The pot, with a lid in the shape of a European Otter, has recently been on display at WLT gallery in Halesworth. The sale was agreed shortly after WLT posted a mention of the pot on the Maureen Minchin Pottery Fans Facebook page.

Maureen donated the work to WLT, which means that all the proceeds of sale will go towards WLT’s Buy an Acre appeal. The sum raised will protect four and a half acres of Beni savanna, a unique habitat (pictured right)  made up of grassland and forested islands, and home to the rare Neotropical Otter. WLT supports land purchase and conservation in Bolivia in partnership with Asociación Armonia.

“The otter pot sale is wonderful news and I am pleased that you have given the proceeds to the Beni savanna project,” said Maureen. “It’s great that one of my animal motif pots is actually going to help some real wildlife – many thanks to the MM fan club!”

Maureen is currently working on a collection of pots with a Bolivian theme for a sale at Bonhams auction house later this year. WLT hopes to display other works by Maureen in WLT gallery in future.

WLT gallery’s next exhibition will display Laura Carlin’s illustrations for The Promise by children’s author and WLT Ambassador Nicola Davies. The Promise opens at WLT gallery on Saturday 15 March 2014 and Laura and Nicola will be signing copies of The Promise in the gallery on the opening day, 11am – 2pm.