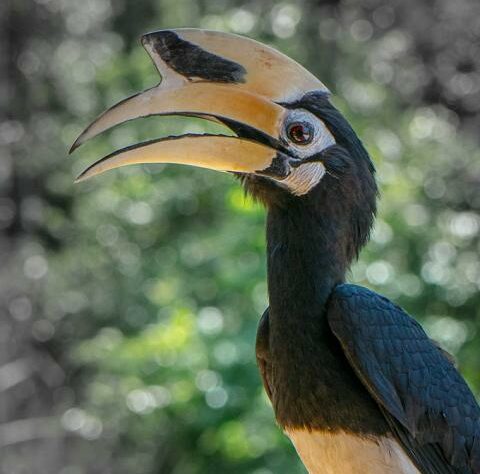 Pied Hornbills have been seen entering a nest box that was installed in the Bornean rainforest in late 2013. The hornbill nest box programme is managed by staff of Hutan, World Land Trust’s (WLT) partner in Malaysia.

“We still don’t have any firm evidence that hornbills are using the nest boxes,” said Dr Marc Ancrenaz, Co-Director of Hutan, in February 2014, “however a pair of Pied Hornbills have been spotted several times inspecting one artificial nest and even going inside for a short while.”

The sightings were recorded by fishermen and by research assistants at Hutan’s Kinabatangan Orang-utan Conservation Project.

Lower Kinabatangan Wildlife Sanctuary is home to all eight species of hornbills found in Borneo including Helmeted Hornbill and Rhinoceros Hornbill. The birds rely on the large, natural holes of mature trees in which to build their nests and fledge their young.

The problem is, there are no longer enough suitably mature trees for hornbills to nest in, and there are signs that hornbill numbers are declining as a result.

Chester Zoo is a partner of Hutan (and also supports WLT). In September 2013, Paul Morris and Wayne McLeod from Chester Zoo visited Kinabatangan as part of a pre-arranged visit. They were joined by two keepers from Zoo Parc Beauval, and the timing was perfect. Hutan staff were keen to launch the hornbill nest box programme and the keepers’ arrival provided the necessary incentive.

In a week, five nest boxes were built and four are already set up in the forest. This is a great achievement because the nest boxes weigh between 40 and 50 kilograms and have to be positioned in trees at more than 20 metres above the ground.

After the event Paul said: “It was a fantastic experience to be working in Sabah, and the fact that two more nest-boxes have already been sited shows what a hardworking and committed team Hutan has in Sukau! Considering it was the first hornbill nest box set up, I think we achieved a lot, and hopefully the project will run and run and we will get a better understanding of what needs to be done in the future.”

At the outset of the project, it wasn’t clear what kind of equipment and material would make the most suitable nest box for the wild hornbills. After some brainstorming and shopping in Sandakan (nearest city) the team decided to use plastic drums covered with polystyrene and concrete.

“We will of course keep on monitoring the nests in order to document their potential use,” said Marc, adding: “This year (2014) we are going to set up new boxes with a different design to diversify the choice offered to the birds.”

Installing nest boxes for hornbills is a temporary measure necessary only until the forest trees that are being replanted in degraded areas grow to maturity.