Every vote counts: please back the Caucasian Leopard for a £25,000 grant SEARCH NEWS If enough people back WLT’s Saving Armenia’s Leopard project, it will win a grant of €30,000. The funds will support vital conservation measures for the Caucasian Leopard in Armenia – and every vote counts.

Until just a few years ago, the future for the Caucasian Leopard looked bleak. This sub species of leopard is registered as Endangered on the IUCN Red List and has a total population of no more than 1,300. The Caucasian Leopard stronghold is in Iran, where it is known as the Persian Leopard, but in Armenia there may be as few as 15 individuals remaining. There hadn’t been a sighting in Armenia since 2007.

But, undeterred, in 2010 the Foundation for the Preservation of Wildlife and Cultural Assets (FPWC) raised funds to establish the Caucasus Wildlife Refuge (CWR) and to implement robust measures to protect the Caucasian Leopard and its habitat. 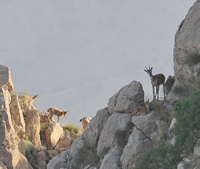 Conservation efforts have increased the number of Bezoar Goats, which are vital leopard prey. © FPWC.

FPWC’s rangers took steps to reduce the hunting of Bezoar Goats in the CWR and through community engagement they encouraged the sustainable harvesting of wild plants and herbs. Both these measures are essential for the survival of the Caucasian Leopard: goats are their prey and the natural vegetation of the South Caucasus provides food for the goats. (Put simply: no goats, no leopards.)

WLT has supported FPWC’s conservation measures since 2010 and within a few years it was clear that FPWC’s efforts had been worthwhile. On three occasions in 2013, camera-traps recorded a leopard in the Caucasus Wildlife Refuge.

The video recordings attracted international attention, and rightly so, because the Caucasian Leopard is an important symbol both nationally in Armenia and internationally. The species must not be allowed to die out.

Journalist and WLT Council Member Simon Barnes is a fan of what he calls the Euro-leopard.

Writing in The Times, he said: “Armenia counts as Europe: their football team is ranked  by UEFA, the European football union, so it must be true. And they have leopards. Our own Euro-leopard. As Europeans we all have a share in that pleasure and, of course, an opportunity to invest in their future.”

But, as Simon points out: “There aren’t many of them. There may be no more than 15 of them in all Armenia. They’re there to save if we want them.”

Yes, they are there to save if we want them, so please cast your vote for Saving Armenia’s Leopard.

People can only register one vote, so please encourage your friends, family and colleagues to vote as well.

Click the Vote Now button and you will be directed to the voting page of the EOCA website. Scroll down through the list of projects to find Saving Armenia’s Leopard – and then vote! WLT has been supporting FPWC’s conservation protection measures in Armenia since 2010.

WLT has provided Keepers of the Wild funding for the employment of rangers in the Caucasus Wildlife Refuge since 2011. The rangers monitor wildlife, deter poachers and raise awareness and support for conservation activities among local communities. Since late 2012 WLT has been running a special appeal for additional funds to Save the Caucasian Leopard.

For the EOCA vote WLT has developed the project Saving Armenia’s Leopard in partnership with FPWC. If successful, FPWC would use the grant to strengthen conservation actions, develop sustainable tourism initiatives with local communities and undertake research and monitoring to build a greater understanding of this little studied predator. More about how the grant will be spent »

WLT’s project has been nominated by Nikwax, a WLT corporate supporter and member of EOCA. More about EOCA »