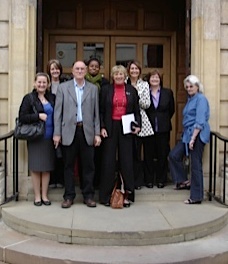 Many local authorities have flower beds filled with bulbs such as tulips. At the end of the season these may go to landfill or green waste. Seeing these bulbs sitting in the council yard, waiting for disposal, I asked if I could sell them for charity. Of course, I was told. The bulbs were bagged up and I took them home to dry on our gravel.

When dry, the bulbs were transferred into smaller bags (minus a few that had been pinched by the squirrels) and placed on a spare table in our open plan office. (Every office has a tea room or a small table in the corner that isn’t used for anything in particular.) We put up a sign selling them for charity and an honesty box. Another small table in the tea room was also put to good use.

It wasn’t long before £300 worth of bulbs had been sold. Colleagues suggested that we keep going, so we brought in unwanted books, DVDs, Christmas presents, small children’s toys and other bits and pieces.

Many colleagues didn’t have time to pop into charity shops to look for bargains. Also, these shops can be overwhelming if you are short of time. However, in the tea room, browsing was easy while on a break and waiting for the kettle to boil. One of our regular donors was the cake delivery man, a good friend of mine!

All we had to do was manage the money, keep some change in the tin and make sure items did not stay there too long. Local charity shops benefited from any unsold items.

Everyone joined in. The Council’s Chief Executive was a regular donor and customer, Councillors would pop in for a browse and colleagues from other departments and floors would keep an eye on the stall. You would find yourself rubbing shoulders with someone you had only previously spoken to before in a work capacity, and it helped people from different departments get to know each other. It was fun: it only took a minimum of time and, in all, over five years, the sales made nearly £3,000 for local charities.

The local paper twice covered our fundraising activity with photos, so the public could see that we were doing something other than prosecuting them for parking fines and the like (we were the legal and admin department).

It was a win-win situation. I still have several books bought from the sale at knock down prices, some china and other handy items. I could bring home the odd surprise for the children, or a book for my husband.

All you need is a table

Any office, large or small can do this. All you need is a table and a few bits and pieces to start with, and suddenly you realise that you are helping others and having fun in the process.

We gave the money we raised to charities local to Worcester, but I have been following the progress of World Land Trust with interest, especially the articles in The Times on Saturdays by Simon Barnes. I agree that species conservation without land support cannot be a longterm solution and I am pleased to be supporting the Trust now that I am retired.

WLT needs everyone who really cares about saving wilderness and wildlife to take positive action. By fundraising for WLT you will bring vital support to our urgent conservation work, while letting everyone know about what we do and why you support us. More about how to get started fundraising »