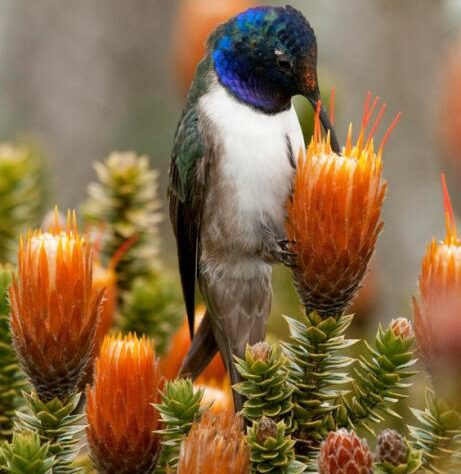 Hacienda Antisanilla lies on the west slope of the majestic Antisana Volcano, at 5,704 metres above sea level one of the highest active volcanoes in the world. The property is some 40 kilometres south east of Ecuador’s capital Quito.

Together with the adjacent Hacienda Sunfuhuaico, which was purchased by FJ in 2011, the two properties cover nearly 12,500 acres (5,000 hectares) of high Andean páramo.

This area has been heavily grazed by cattle for a very long time, and much of the land is now entirely dominated by stipa grass. However, some patches of stony ground that have been less grazed by cattle retain a much richer flora. With a variety of small trees, shrubs and flowers, these areas are likely to resemble the region’s original vegetation.

“Antisanilla, and the adjacent Sunfuhuaico will be an exciting challenge for restoration of the páramo to its original diversity of grasses, flowers, and shrubs,” said Nigel Simpson, Trustee of both FJ and WLT.

“Some 5 to 10 per cent of the property is high diversity habitat, which will provide the raw material for a long term restoration programme in conjunction with a change of grazing practices, including eventually the reintroduction of previously native camellids.”

The orange flowered Chuquiragua, which thrives at high altitudes, is found growing on under-grazed land at Antisanilla. The Chuquiragua provides an important food source for the Chimborazo Hillstar (Oreotrochilus chimborazo), also called the Ecuadorian Hillstar, the highest living of all hummingbirds. No other species of hummingbird occurs at higher altitudes in the Andes of Ecuador.