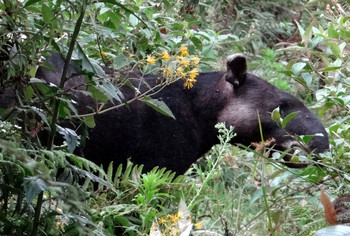 The reserve, on the eastern slopes of the Ecuadorian Andes, now covers 1,752 acres (710 hectares) and supports a wealth of plant and animal life. The Rio Hollín, which flows into the Amazon, bisects the site and is a draw for wildlife.

The location of the new reserve is crucial to its conservation value. It is located on the edge of Sumaco National Park and forms part of a long term plan to protect a wildlife corridor between Sumaco and neighbouring Napo-Galeras National Park.

Connecting the two parks will allow wildlife to move from one area to the other, improving the chances of survival for isolated animal populations.

“This kind of habitat is not well protected by existing reserves, so this is an important purchase,” said Rocío Merino of Fundación Jocotoco. “We hope that more land can be added in the future to safeguard the wildlife corridor linking these two national parks.”

The purchase, which was completed in December 2013, was made possible by funds from WLT’s Buy an Acre appeal and from American Bird Conservancy.

This mid-altitude forest, at 1,100 metres above sea level, is particularly vulnerable to deforestation. Accessible and fertile, it is more likely to be cleared for agriculture than the mountainous forests above, or the Amazonian lowland forest below. Land valued by humans is also valuable for wildlife, and these forests are home to an impressive number of species.

Puma and Ocelot stalk the understorey of these forests, while Spectacled Bears build sleeping platforms overhead. Brazilian Tapir and deer species have also been recorded.

More than 300 bird species have been observed in Narupa, including the migratory Cerulean Warbler (Setophaga cerulean). This bright little bird is the fastest declining of all Neotropical songbirds. Its survival is dependent on suitable winter habitat in the northern Andes, and rapid deforestation has left it vulnerable.

Other birds here include the iridescent Coppery-chested Jacamar (Galbula pastazae) and the Military Macaw (Ara militaris), both of which are registered as Vulnerable on the IUCN Red List.

WLT currently supports Fundación Jocotoco with funding for rangers through WLT’s Keepers of the Wild programme.