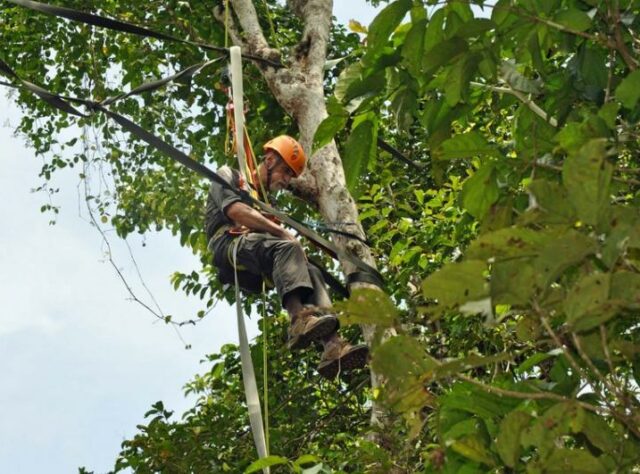 Staff from Chester Zoo have assisted Hutan, WLT’s partner in Malaysia, with the construction of rope bridges for Orang-utans.

They built two bridges over tributaries to allow the animals to cross what had become an impassable barrier following the destruction of large, overhanging trees close to the water’s edge. The construction of the bridges incorporated webbing material supplied by Chester Zoo.

The team was assisted by Ken Krank and Felicity Oram as well as by KOCP field research assistants.

In another piece of good news, Hutan has received a report of an Orang-utan crossing the hanging bridge that was erected two years ago with help from Chester Zoo.

Orang-utans spend most of their time in the canopy and very rarely come to the ground unless there is no route through the treetops. Despite their arboreal nature and the installation of many rope bridges over the past decade, the Lower Kinabatangan’s Orang-utans have not been seen using the new bridges until relatively recently. (Interestingly, the bridges are popular with other primates, such as Long-tailed Macaques and Proboscis Monkeys who are more often seen using them to cross water.)

Therefore, the fact that Orang-utans are finally using the bridges to increase their territory is a real conservation achievement.

“It’s clear that the Orang-utan bridges are working to reconnect some of the populations that are divided by drains or tributaries,” said Marc Ancrenaz, Hutan Co-Director, after the successful construction of the new bridges.

World Land Trust’s Borneo Rainforest Appeal is raising funds to protect habitat vital for the survival of the Bornean Orang-utan in the wild in Sabah, Malaysian Borneo. The appeal’s million pound target is within reach – the total to date is £885,000 – so please make a donation.