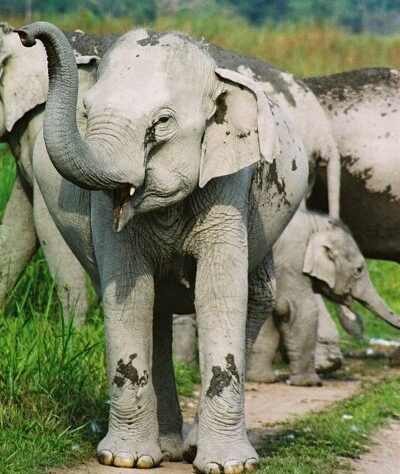 As an important step in linking Rewak Reserve Forest with Emangre Reserve Forest in Meghalaya, the Rewak-Emangre Corridor has been officially declared, which further consolidates WLT’s past success with the Siju-Rewak Corridor in 2007.

Since 2003, World Land Trust (WLT) has been working with conservation partner Wildlife Trust of India (WLT) to secure a network of elephant corridors across India, and this recent Village Reserve Forest designation is a milestone for our joint Elephant Corridor project.

The 568 acre (230 hectare) area now officially designated a Village Reserve Forest will be managed by a local representative body under the auspices of Garo Hills Autonomous District Council. The designation was made in December 2013.

The Rewak-Emangre Corridor is regularly used by elephants and other wild animals. The main threats to the corridor are from expansion of human settlements, slash and burn cultivation and mining.

The Rewak-Emangre Corridor is located in the south Garo Hills within the traditional tribal lands of the Garo communities. These hills are home to 60 per cent of the 1,800 Asian Elephants that roam Meghalaya’s upland terrain.

The principle occupation in the area is agriculture and Garo Hills farmers practise traditional slash-and-burn farming, known locally as jhumming. With increased population pressures, the jhumming has become much more intensive, particularly around village locations.

Over time the productivity of the jhummed fields has decreased and other issues including soil erosion and water shortages have arisen in these once densely forested areas. In addition, the expansion of farming increases conflict between humans and wild animals such as elephants, and primates such as the Western Hoolock Gibbon (Hoolock hoolock), which is registered as endangered on the IUCN Red List. The conflict arises because the natural forest habitats have been depleted, and the animals are increasingly straying into areas of human settlement.

Elephants are particularly troublesome visitors to the Garo villages as they are prone to crop-raiding, cause serious damage to fences, homes and other infrastructure and can be directly responsible for human injury or loss of life. For these reasons, almost throughout the year, Garo villagers are forced to watch over their crops for 24 hours a day, armed with firecrackers to scare away intruding elephants.

The protection of the Rewak-Emangre corridor will contribute to the provision of unhindered movement of elephants from Balphakram National Park to Nokrek National Park.

In the long term, a habitat restoration programme, currently underway, will restore and protect previously degraded areas of the forest by planting indigenous trees.

The Village Forest Reserve has already been demarcated for inclusion into the Garo Hills Autonomous District Council’s protection network and WLT and WTI are supporting the community to develop sustainable farming practices and an economy based on conservation.

WLT has also supported other projects within the local community including the restoration of the village school. In  2014, WTI will also help the community to build a hanging-bridge over a local river which floods during the monsoon season leaving the village completely isolated. With the new bridge in place villagers will be able to access markets and healthcare all year round.

We are very grateful to adam&eveDDB Communications Company who were the original sponsors of this project.

You can support the development of India’s network or elephant corridors by donating to WLT’s Action Fund and specifying ‘Indian Elephant Corridor Appeal’ in the comments box.