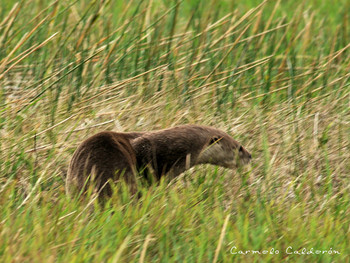 A Neotropical Otter has been seen and photographed for the first time at Barba Azul Nature Reserve in Bolivia’s Beni Savanna.

This is a conservation breakthrough and indicates that habitat protection measures on the reserve, supported by World Land Trust (WLT), are working.

The Neotropical Otter is listed as endangered in the Convention on the International Trade of Endangered Species of Wild Fauna and Flora (CITES, Appendix I) and classified as Data Deficient on the IUCN Red List.

Barba Azul was created by Asociación Armonía, WLT’s conservation partner in Bolivia in 2008, on land that had been intensively managed for cattle ranching for more 100 years.

“At Barba Azul, everything is rebounding as if the area is recovering from a drought,” said the Executive Director of Armonía, Bennett Hennessey, who is delighted at the news of the Neotropical Otter sighting. “Fish numbers are doubling, Caimans are growing and becoming more numerous, rare tall grass savanna birds are reappearing, and mammals and predatory mammals like the Pampas Cat and now the Neotropical Otter are appearing.”

An important aquatic predatory mammal, the Neotropical Otter is a key component of a healthy ecosystem and brings to 27 the number of medium to large mammals on the reserve.

Bolivia’s Nature Photography club visited Barba Azul Nature Reserve in October 2013. During the visit members of the club photographed a Neotropical Otter, the first to be seen on the reserve since it was formed.

Many of the more recent records are likely to indicate species returning to a healthy environment. Some of these species are the Pampas Cat (Leopardus pajeros), Marsh Deer (Blastocerus dichotomus), Gray Brocket Deer (Mazama gouazoubira), and White-lipped Peccary (Tayassu pecari).  WLT’s YouTube site has some entertaining videos of wildlife on the reserve, including a film of a Giant Anteater (Myrmecophaga tridactyla) having a wallow.

Bolivia’s Beni Savanna is subject to flooding due to seasonal rainfall combined with melt water from the Andes, which creates the ecoregion’s distinctive mosaic of forested islands.

WLT supports Armonía’s conservation efforts and the expansion of Barba Azul Nature Reserve through its Buy an Acre programme.