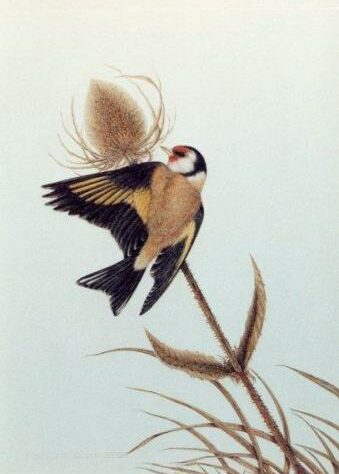 Works on display in World Land Trust gallery illustrate in beautiful detail some of the many ways in which wild creatures adapt to survive, and the importance of conserving natural habitats for the survival of many creatures.

A fundamental principle of nature conservation is that wilderness areas sustain a rich diversity of species. And, reflecting the habitat protection work of World Land Trust (WLT), pictures in the gallery‘s current exhibition reflect the importance of wild places in the cold months of the year.

Brambles, dead flowers and weeds are often the first things to be uprooted from parks and gardens but they are important food sources for birds and small mammals, while dead leaves are perfect hiding places for hibernating insects.

In the UK, wildflower seeds and hedgerow fruits provide sustenance for birds towards the end of the year. Two works by Nick Day show a Goldfinch and a Greenfinch foraging for autumn seeds, and the importance of blackberries as a food source is finely illustrated by Andrew Pitt’s Autumn Robin and Steve Cale’s Red-backed Shrike.

Migration is a common wildlife survival strategy. The Red-backed Shrike, for example, escapes the cold temperatures of Europe and western Asia by migrating to tropical Africa. Once a regular migratory visitor to Great Britain, the Red-backed Shrike is now very rare in this country: in 2013 just one pair successfully fledged two young at a secret location in Dartmoor. (Steve was lucky enough to spot a shrike in Blakeney in September.)

Overwintering in WLT gallery for the duration of the exhibition is a flock of birds brilliantly created by Roger Hardy from recycled hand tools and sports equipment. (Surely only Roger could find such an imaginative second life for wooden tennis racquets!) Popular with people of all ages (and a source of fascination for the very young), Roger’s sculptures are highly entertaining and curiously realistic.

Artists Kate and Hannah Breach highlight the tiniest details of the natural world. Their picture of Seven-spot Ladybirds hibernating in the shelter of a dried up leaf is just such an example. These insects will rest peacefully in the curl of a leaf until coming out of hibernation in April. Another fine illustration is their picture of a Herald Moth, which hibernates in woodland areas where – as the picture shows so well – its wing pattern is camouflaged against a background of dead leaves.

The exhibition, entitled Surviving the Season, is open until 15 January 2014.

In the run up to Christmas WLT gallery’s winter exhibition is always a good place to find original gifts that support conservation. Also on sale in the gallery is a range of books and seasonal greetings cards. Artworks, cards and gifts can also be ordered from our online shop. Proceeds from WLT gallery go to support WLT’s conservation work.

One of the works on display, Steve Cale’s Hard Hunting Tonight, is for sale by silent auction, with a bidding deadline of 4pm on 20 December 2013. More about the auction »