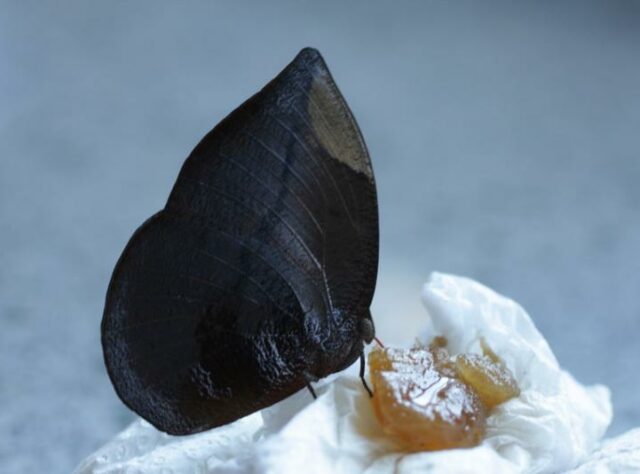 An incredibly rare butterfly has been recorded for the first time at Reserva Ecológica de Guapi Assu (REGUA), a reserve in Brazil supported by World Land Trust.

Polyxo Leafwing (Memphis polyxo) is a highly uncommon, resplendent butterfly. It is a new species for REGUA and the Três Picos State Park, where REGUA is located, and could well be among the fewer than half dozen individuals registered or ever seen in Rio de Janeiro state.

“Even at REGUA, miracles never cease to occur,” said Nicholas Locke, REGUA Director. “Yet another rare forest species has been recorded as a result of our reforestation of the lowlands close by.”

Polyxo Leafwing is mostly associated with primary forest canopy, only coming to the ground to feed on fermented fruit, organic material and occasionally the rotting meat of animal carcasses.

As it feeds at dawn and dusk, staff and visitors at REGUA were delighted to come across it in the middle of the afternoon. Helpfully, the butterfly landed in the laboratory and was first seen flapping its wings against a window pane in an effort to escape.

Without wasting a minute, REGUA’s Research Co-ordinator Jorge Bizarro got out his especially prepared butterfly Cachaça fruit jam, smeared some on a tissue and waited. Sure enough, after smelling the delicacy with its antennae, the butterfly landed and was so busy enjoying the fermented jam that nothing would convince it to fly away. While it feasted, staff took many photos. On release it settled on a nearby Cecropia tree.

REGUA is situated 80km north east of Rio de Janeiro in Brazil in the Serra dos Órgãos Mountains. The reserve spans from around 30 metres above sea level, at the wetland areas, up to 2000 metres. It is one of the few remaining locations where original Atlantic Forest remains intact at all altitudes. REGUA staff take an active role in managing the reserve, and reforestation and wetland restoration projects have been enormously successful in terms of encouraging biodiversity.

Although the Memphis genus is a Neotropical species spanning southern USA to Argentina, Memphis polyxo has a more limited distribution, from Colombia south to Bolivia and southeast Brazil. The species was found and named by British entomologist Herbert Druce in 1874 from a specimen in Rio de Janeiro state. Little is known of its biology, though there is one recorded sighting of a female laying eggs in a laurel tree (Lauraceae) in the forest canopy.

Brazil has more than 3,000 butterfly species, of which 1,000 are found in the Atlantic Forest. So far, 570 have been recorded at REGUA and the surrounding area, although it is likely that there could be as many as 700-800 in total. REGUA staff are keen to establish a comprehensive list of butterfly species on the reserve and their flight times. To help with identifying different species, staff have produced a guide to 54 common butterflies on the reserve, and visitors are invited to send records and photographs to REGUA.