Carlos Ardón: Keeper of the Wild in Honduras SEARCH NEWS 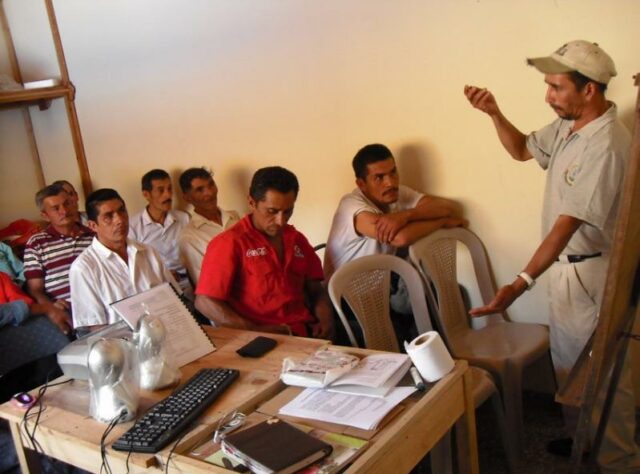 José Carlos Ardón (Carlos) is Head Ranger at Güisayote Biological Reserve, in western Honduras. Since August 2013 his post has been funded by World Land Trust (WLT) through the Keepers of the Wild programme.

“I do what I love: preserving the environment and talking to people about the importance of protecting the planet and the practical things we can all do together,” says Carlos Ardón. Since 2007 Carlos has been working for Asociación Ecológica de San Marcos de Ocotepeque (AESMO), WLT’s conservation partner in Honduras.

“What motivates me is the satisfaction of being able to use my training and experience in the conservation work of the reserve, while at the same time being able to enjoy the natural world.”

“I do what I love: preserving the environment and talking to people about the importance of protecting the planet and the practical things we can all do together.”
(Carlos Ardón, Keeper of the Wild, Güisayote Biological Reserve)

Carlos is responsible for the activities of a team of rangers, working throughout Güisayote Biological Reserve. His working day starts at 8:00am and finishes at 5:00pm, and he has an hour long commute by motorbike from home in the community of El Barranquito Colorado in the municipality of San Marcos, to the Visitors Center in El Portillo in the municipality of Sinuapa.

During working hours, Carlos spends the week visiting different parts of the reserve. Occasionally, he goes out on night patrols, but not as often as he’d like, due to restrictions on staff and equipment. He travels the reserve on foot, or motorcycle where there are suitable tracks. He takes with him a wireless radio or cellphone, and a notebook and digital camera to record sightings of wildlife

Carlos and the other rangers monitor wildlife in the reserve. “We are very careful when we tour the reserve, keeping as quiet as possible so as not to disturb wildlife,” he explains.

“The best place to see birds is at the Guitarrilla waterfall at dawn, and we look out for Resplendent Quetzal (Pharomachrus mocinno) in particular. In terms of mammals, we monitor Nine-banded Armadillo, known locally as Cusuco (Dasypus novemcinctus), Oncilla (Leopardus tigrinus), also known as the Little Spotted Cat, Tigrillo, or Tiger Cat, and Kinkajou also known as Honey Bear (Potos flavus). We take great care with all sightings of Jumping Pitvipers known locally as Timbo (Atropoides nummifer) because they are highly venomous.”

One disappointment for Carlos is not to have seen a Geoffroy’s Spider Monkey (Ateles geoffroyi). “I’ve always wanted to see this Spider Monkey, one of the rarest species of monkey, and one that I’ve only seen in zoos. A ranger colleague claims to have seen one in the El Sillon area, so I know it’s possible.”

Carlos and the other wardens check the condition of trees on the reserve including Smooth-bark Mexican Pine (Pinus pseudostrobus), Mountain Oak (Quercus skinneri), the wild avocado tree Aguacatillo (Persea caerulea), and tree ferns.

Carlos is active in all aspects of AESMO’s outreach programme. He give talks to vegetable producers on managing agricultural pesticide residues, and he delivers training in organic farming. He has developed a wide range of environmental educational activities including tours of the cloud forest, and he has also overseen the installation of compost toilets.

“Local people look on the rangers as friends and not as people who want to interfere in their economic activities.”
(Carlos Ardón, Keeper of the Wild, Güisayote Biological Reserve)

“These programmes help improve the quality of life for local people and keep the reserve in good order for tourists. Visitors to the reserve provide an important source of income for the local economy by spending money on fruit, vegetables and flowers grown by those living within the protected area,” he explains.

Carlos’s work brings him into contact with a range of people including representatives of the municipalities, civil society and central government, as well as local and foreign visitors.

He is pleased to say: “Local people look on the rangers as friends and not as people who want to interfere in their economic activities. Granted, there are always some people who do not like rangers because we stop them cutting down trees for farming and because we prevent hunting, but in general most people respect what we do.”

“In the case of farmers, they now treat us like friends. They have had training and technical assistance from us, and now they can help us by reducing the impact of their agricultural activities on biodiversity and watersheds. They take care to dispose of toxic products safely, and avoid dumping chemical containers near water sources.”

Another of Carlos’s tasks is to assist researchers, accompanying them to sites where they have observed species of interest for purposes of study, and putting them in contact with the authorities and local communities.

Carlos’s first job at AESMO was managing a project called Conservation, Protection and Sustainable Management of Biological Reserve Güisayote, which was funded by Honduras Counterpart Fund – Canada. Their support helped re-establish the forestry nursery within the reserve.

Before working with AESMO, Carlos had a job supporting the creation of micro enterprises in Western Honduras as part of a project managed by a consortium of Honduran NGOs with European Union funding. He has also worked in complementary fields such as organic and conventional agriculture, and as a social promoter and coordinator of an advocacy project on water as a human right.

He values the strong commitment to conservation at Güisayote Biological Reserve shown by co-managers at AESMO and the municipalities. “The engagement of local, private companies is important, as is the remarkable contribution of WLT through its Keepers of the Wild programme.”

Inevitably, there is a down side to every job. “The worst aspect of my job is when I feel powerless to prevent damage caused by people without conscience, either from ignorance or from commercial self interest, at the expense of such a beautiful natural area.” Carlos also regrets there is not more protection for indigenous peoples and feels that the Indigenous People’s Land Act has not served to protect Honduras’s indigenous peoples.

Despite this, Carlos is confident of the value of his role: “My work is important because I can pass on my knowledge to other adults and children living in the reserve, as well as to our visitors. I also really enjoy the opportunity to do what I love, knowing that we are helping the environment and society.

“Looking ahead, I hope that one day Güisayote Biological Reserve will have more land and more resources to conserve biodiversity and watersheds.”

WLT’s mission is to protect the world’s most biodiverse habitats by purchasing land for conservation in partnership with overseas conservation organisations. But land protection doesn’t stop once the land is purchased: it is an ongoing process and requires dedicated staff. Carlos’s story is typical of WLT’s other Keepers of the Wild and demonstrates the important and multifaceted role that rangers play. You can help support Carlos and rangers on reserves created by WLT by donating to Keepers of the Wild.

Wildfires have ravaged the Australian landscape since time immemorial, and while these blazes, in the past, have resulted in tragic …