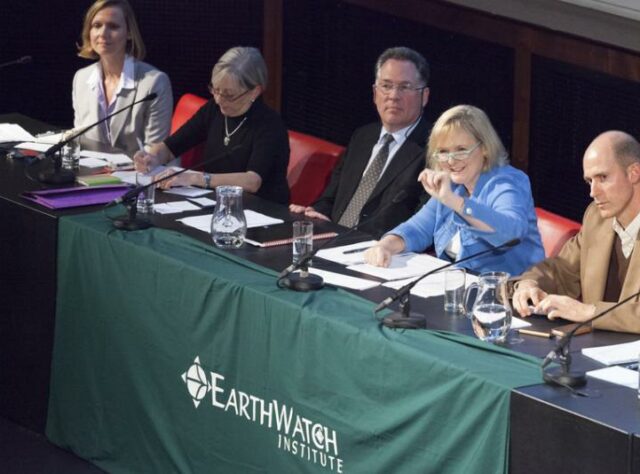 Could legalising the trade in rhino, elephant and tiger products be an effective approach to conservation? World Land Trust intern Rebecca Armson reports on the recent Big Earthwatch Debate 2013: Bone of Contention.

The control of wildlife trade under the Convention of International Trade in Endangered Species of Wild Fauna and Flora (CITES) currently fails to put a stop to the poaching crisis.

Despite their protected status, at least one tiger is killed by poachers every day and recent years have seen dramatic increases in elephant and rhino poaching. The huge quantities of ivory seized reflects just a fraction of the illegal ivory trade, and at current rates of poaching in South Africa, one rhino is lost every nine hours.  The dire situation also puts human lives at risk: a ranger is killed every four days.

The illegal trafficking of wildlife products is organised by criminal networks that profit from the market for ivory, rhino horn and tiger products (for various medicinal and ornamental uses). The increasing demand for wildlife trade across parts of Asia is having a disastrous effect on international conservation efforts.

Many conservationists believe that, rather than enforcing a ban, a more effective way to combat poaching is to supply the demand by a well-regulated legal trade.

Opening proceedings in support of the motion, Dr Duan Biggs (Research Fellow at the University of Queensland, Australia) presented a strong case for the argument that a tightly regulated legal horn trade is the best way to conserve rhinos in South Africa. Instead of fighting “a losing battle” under the trade ban, he outlined how the practice of farming rhinos and regularly trimming the horn could not only prevent the unnecessary killing of rhino but also meet the high demand for rhino horn.

So, can legalising trade work as a conservation approach?  Is the strategy deliverable?

Mary Rice, Executive Director of the Environmental Investigation Agency, believes not. For her, arguments for introducing legal trade were simply “academic postulating”. In practice, implementing and managing a legal trade is a high risk strategy.

The debate highlighted the complexity of the issue in both moral and economic terms. Is it right to validate the economic exploitation of endangered species and to put them on equal terms with domestic livestock? Would the farming of wild animals deter tourists? Will legal trade fuel demand? Would legal trade facilitate a black market? What effect would a legal trade in African Rhino horn have on Asian rhinos and other species?

Those on the opposing side expressed the major concern that a legal trade would facilitate the laundering of illegal products: certification can be easily counterfeited and having a legal source would make it much harder to detect and prosecute illegal trading. Mary Rice said: “If a product is banned, everyone knows it is illegal. It seems to make perfect sense to me that a ban is more straightforward and clear cut.”

Those opposing legal trade also fear that it would actually expand the market: no longer put off by the illegal status of a product, more people will buy it. Furthermore, they doubt the assumption that buyers will switch to purchasing from a legal source. Dr Katarzyna Nowak (Research Fellow at Durham University, UK, and the University of the Free State, Qwaqwa, South Africa) predicts that wild animals will still be pursued because they demonstrate a higher value in terms of social status.

In practice, implementing and managing a legal trade is a high risk strategy. Without knowing enough about demand, it’s impossible to predict how legal trade will impact the market. As Rice put it: “Opening markets without fully understanding the impact of these markets is extremely high risk – and even if it is just slightly off the mark, it is irreversible.”

Critics of the proposal to install a legal trade argue that better enforcement of an outright ban is a more effective solution, but the failure of the current system shows that bans are clearly not working. John Burton, Chief Executive of World Land Trust (WLT) has argued for some time “bans have not worked for either elephant or rhino conservation” and suggests that bans may have actually increased demand and raised the value of ivory and rhino horn.

Michael ‘t Sas-Rolfes related the issue to the drug trade:  “These methods do not work on the war on drugs and won’t work here.” And Kirsten Conrad, a Singapore-based conservation policy analyst, who is in favour of legalisation, asked: “Why keep backing a losing hand?”

In some respects the debate boiled down to a question of risk management. Is legalising trade a greater risk (or challenge) than persisting with the trade ban? An audience poll after the debate showed that the majority of the audience were against considering a legal trade, but there was a decent show of support for the proposal.

The debate was hosted by Martha Kearney, BBC broadcaster and journalist, and  of BBC Radio 4’s The World at One.

The debate was held at the Royal Geographical Society on 17 October 2013.