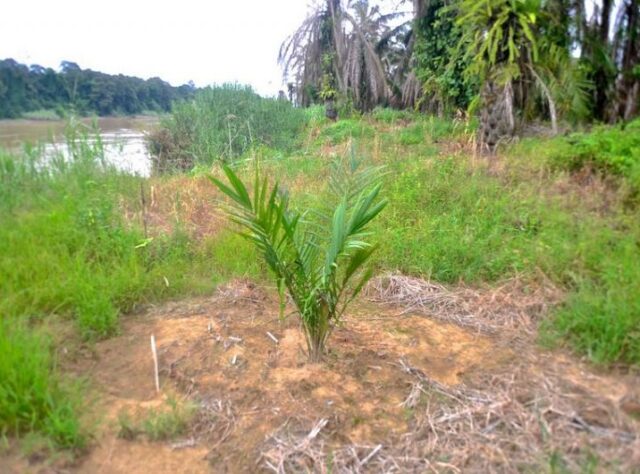 News that oil palm saplings are being planted on the banks of the Kinabatangan next to protected areas – and in open defiance of Sabah state government regulations – has dismayed conservationists in Malaysian Borneo.

Planting oil palm saplings up to the edge of the Kinabatangan River goes against a 2006 state government ruling because it exposes the river to pollution from herbicides and pesticide and threatens wildlife and livelihoods.

The plantation that is openly defying the regulation to leave a riverine buffer zone is located next to Lot 6 of the Lower Kinabatangan Wildlife Sanctuary (LKWS) and directly opposite the Class VI Pin-Supu Virgin Jungle Reserve, both of which are fully protected areas.

World Land Trust (WLT) has been supporting conservation in Kinabatangan since 2008, and WLT’s Borneo Rainforest Appeal aims to raise one million pounds to secure a wildlife corridor along the north bank of the Kinabatangan River. The Kinabatangan region is home to the Orang Sungai community and wildlife species such as Orang-utans, Proboscis Monkeys and Bornean Elephants.

“This is just the latest, damaging move by the palm oil industry in Borneo. It is horrifying to see plantation owners’ blatant disregard of the regulations, which were established in order to protect the river – the lifeblood of the communities in this region,” said Mary McEvoy, WLT’s Conservation Programmes Manager (Asia Region).

“Leaving the river’s buffer intact is already the very least this lucrative industry can do, so it is disappointing when plantations ignore this simply to establish a handful more palms in this fragile area.”

Lot 6 is home to Danau Girang Field Centre (DGFC) and Sabah Wildlife Department’s field centre, both of which are visited by students and researchers from around the world.

“I pass this area frequently,” said Dr Benoit Goossens, DGFC Director, “and I am shocked to see that oil palm estates repeatedly plant palms along the river banks without setting aside corridors of forest along the river banks. This is a rainforest and a floodplain and without a buffer it is only logical that pesticides and herbicides may end up in the river.”

“Whatever herbicide or pesticides the plantation uses to maintain their oil palms could also end up in the river and we fish and use the river water to wash.”
(Rosli Jukrana, resident of Batu Puteh village)

Local residents and conservations are also concerned that oil palms are poisoned at the end of their natural life, rather than being cut down.

Members of the local community of Batu Puteh use the Pin-Supu area for tourism activities. Rosli Jukrana lives in the village of Batu Puteh, which is 10 minutes by boat from the plantation.

“Of course, we are worried when we see this kind of activity when it is right next to the river bank and there is no buffer area,” said Rosli, adding: “Whatever herbicide or pesticides the plantation uses to maintain their oil palms could also end up in the river and we fish and use the river water to wash.”

Sabah’s Tourism, Culture and Environment Minister Datuk Seri Masidi Manjun is aware of the matter and has asked for a full report. “It seems my repeated warnings have fallen on deaf ears and the culprits should know the Sabah government does not deal lightly with such errant acts,” said the Minister.

In attempt to work with, rather than against, the oil palm sector, Hutan, WLT’s conservation partner in Malaysia, backs a certification scheme for plantations, the Roundtable for Sustainable Palm Oil (RSPO). “To be certified, plantations have to protect water courses with riparian buffers,” said Harjinder Kler from Hutan.

Critics of RSPO argue that plantations only comply with RSPO’s principles and criteria when they want to be certified. Furthermore, there are plantations that are members and still not certified, and many of these plantations are in Kinabatangan.

Leaving aside the question of water pollution, the disregard of oil palm plantations for forest buffer zones also means that islands of forest become marooned in a sea of oil palm, effectively trapping wildlife populations within human made barriers.

“As a geneticist, I am always alarmed by such situations because isolation of wildlife species within small forested areas is genetically unviable in the long term, and leads to decline of genetic diversity and ultimately localised extinction,” said Dr Goossens.

WLT is urgently raising funds to safeguard a strip of forest along the north bank of the Kinabatangan River. This strategic wildlife corridor is being created in partnership with Hutan. It will form a protected linkage between Keruak Forest Reserve and one part of Lower Kinabatangan Wildlife Sanctuary (LKWS), and it has been estimated to cost one million pounds.

Thanks to the success of WLT’s Big Match Fortnight in the first half of October 2013, more than £600,000 has been raised towards the target million, but more funds are still urgently needed. Please give generously to the Borneo Rainforest Appeal »