At home with the Howler Monkey SEARCH NEWS 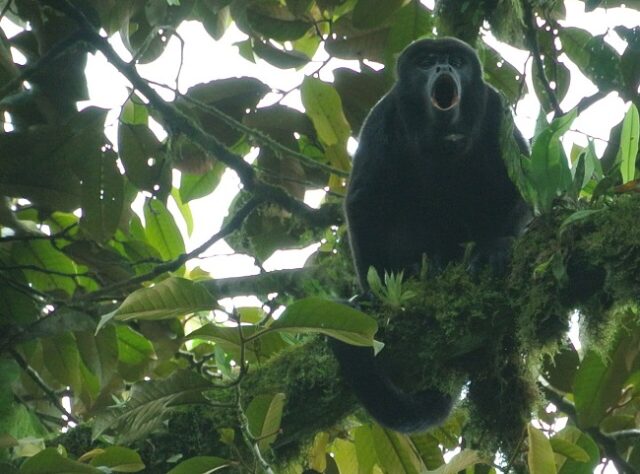 The Chocó Rainforest is a wild world – and one under threat. Roving reporter, Bethan John explores the rainforest of north western Ecuador and meets some of its noisier residents.

Like clockwork, at 5.50am every day, the rainforest wake ups. At first, the bird song is a murmur, a whispering chatter of chirps and tweets, like gossiping nuns at chapel. Beneath the soft haze of mosquito netting I lie there among them, a silent intruder, listening.

By 6am the forest is alive: frenzied noise fills the air – unseen creatures squawk and whoop like drunken brawlers. A distant rumble becomes a crescendo as primeval roars vibrate across the treetops. The day has begun.

I’m in the Chocó Rainforest, in north western Ecuador, with a team from Fundación Jocotoco, one of the Ecuadorian conservation partners of World Land Trust (WLT).  We’re heading into the Río Canandé Reserve to track down the beast that emits these primeval roars: the Howler Monkey.

For most of 2013, I’ve been exploring the forests of Latin America and the reserves run by WLT’s partner organisations.

During my adventures, I’ve encountered a number of different monkey species and they’ve taught me a few lessons. Number one: do not stand directly below them. Spider Monkeys, in particular, are territorial and can be aggressive: throwing branches at your head is just stage one of their intimidation techniques. If that fails to send you scurrying then the urine splattering down from the treetops usually does the trick.

The Howler, although roaring like a top predator, is a much gentler and shier creature than he sounds. I’ve often heard them, but so far they’ve evaded me. Today I hope to get lucky.

I set off with two rangers – father and son from the local village – who are ready to show me the forest’s secrets. Trekking with rangers who have a great knowledge of the habitat and its wildlife is like being with superhumans. Their eyesight and hearing is unnaturally good – turning leaves into vibrant tropical birds before your eyes.

It’s an easy hour and half walk but the sweat is already pouring from me and mosquitos are feasting on every bare patch of skin. Suddenly the ranger in front stops, peers through the trees to his left, lightly tip-toes forward and peers searchingly again. He leaves the trail and slowly makes his way through the forest’s vegetation. He signals to us to follow him. Despite my attempts to mimic his stealthy steps, I trundle along like a baby elephant, tripping over roots and getting tangled in vines as I go.

Part of a wild world

A few metres into the forest the ranger stops and points to the treetops. There, sitting quietly with his chin resting on his folded arm, is a big Howler, staring at us. Slowly, he lifts his body up onto his arms, opens his great mouth and lets out booming roars – one after the other. As soon as he stops, other monkeys appear in the canopy and join in. The whole forest seems to vibrate with their noise.

We crouch on the forest floor as a mother cradles a baby in front of us and a male struts across the branches near her, periodically erupting into great howls. They seem aware of our presence but aren’t in any hurry to move on. For about half an hour we sit with them, quietly watching their behaviour. For these short moments, I feel part of their world.

Despite its beauty and diversity, this wild world is being destroyed. The roar of the Howler barely drowns out the constant noise of chainsaws that drifts across the forest. The morning chorus cannot compete with the noise of trucks laden with logs that trundle past the eco-lodge all day.

The Río Canandé Reserve offers a safe haven for this family of monkeys and a wealth of other wildlife , and Fundación Jocotoco is desperate to save more of the rainforest. With WLT’s help, the forest reserves of the Chocó can and will be expanded, and the Howler Monkey will be left in peace.