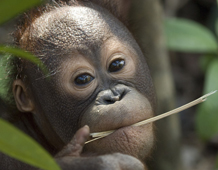 If ever there was a time to make a donation to World Land Trust (WLT), now is that time. And here are the reasons why.

First, during the next two weeks all donations to WLT’s Borneo Rainforest Appeal will be matched, making them go twice as far. There’s really nothing better than knowing that every pound donated pulls in another pound.

Second, WLT’s Borneo Rainforest Appeal is raising money to protect Orang-utans. These magnificent primates share approximately 97% of their DNA with humans, but in Malaysian Borneo their longterm survival is under threat.

Orang-utans need large areas of forest through which to roam, but as agriculture in Borneo expands, so the area of forest shrinks. If we don’t protect the forest that remains, soon there may not be enough left.

Third, you can rest assured that donations will be spent very effectively. WLT’s partner in Malaysia is Hutan, a conservation organisation with 15 years’ experience of studying Orang-utans in the wild.

Thanks to Hutan’s excellent local knowledge WLT has identified a corridor of adjoining parcels of land along the north bank of the Kinabatangan River, between two existing reserves. By making strategic purchases to secure this land bridge between reserves, the overall area of forest for Orang-utans will be greatly increased.

And lastly, in a world where environmental challenges often seem too great to overcome, this is one occasion when something really can be done to make a difference. But we need to act now.

If we delay, it may be too late.

Remember, during Big Match Fortnight your donation will go twice as far.

Big Match Fortnight starts on 2 October and runs until 16 October 2013. Donations can be made online, over the phone by debit or credit card (01986 874422), or by mailing a cheque or Charities Aid Foundation voucher (payable to World Land Trust, with a note to say the donation is for Big Match Fortnight) to WLT, Blyth House, Bridge Street, Halesworth, Suffolk IP19 8AB.