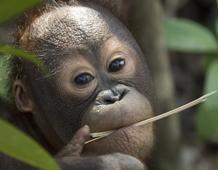 WLT’s supporters rose magnificently to the fundraising challenge both before and during Big Match Fortnight and we are very, very grateful to all those who gave freely of their skills and expertise and helped make the fortnight such a success.

We owe a debt of gratitude to those who pledged match funds in advance, those who donated during the fortnight, and to everyone who helped in the planning and publicising of Big Match Fortnight and the Borneo Rainforest Appeal.

The funds raised are already being used to secure adjacent parcels of land that together form a land bridge between two existing forest reserves in Sabah, north east Borneo.

The forest of Borneo is the last surviving home of the Bornean Orang-utan, and the protection of this corridor will greatly expand the area of forest through which the Orang-utans can roam freely.

The overall Borneo Rainforest Appeal target is one million pounds, and we are redoubling our efforts to raise the remaining funds in 2014, WLT’s 25th anniversary year.

The process of purchasing many small plots is relatively time consuming so, as and when areas of land are secured, we shall bring you more news updates.