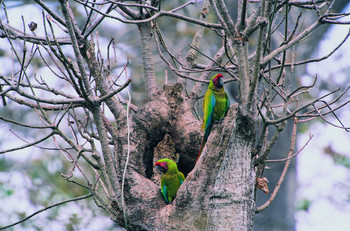 Tree planting in Cerro Blanco Protected Forest increased nine fold, and Keeper of the Wild, Perfecto Yagual de la Cruz, has proved to be an  “inspiration” – all thanks to World Land Trust’s (WLT) support for Fundación Pro-Bosque (Pro-Bosque).

On a recent visit to the UK, Denis Mosquera of Pro-Bosque, one of WLT’s project partners in Ecuador, praised WLT’s support for supporting tree planting in Cerro Blanco. “Prior to WLT’s involvement less than 10,000 trees were planted per year. At the peak of tree planting supported by WLT this increased to 90,000 per year,” said Denis when he visited WLT’s offices in Halesworth in August.

“WLT’s support for tree planting in Cerro Blanco was one of the Trust’s first Carbon Balanced projects, and as such it was very significant,” said Chris Smith, WLT’s Conservation Programmes Officer (Ecosystem Services). “We are delighted that the reforestation has been such a success.” WLT continues to support Pro-Bosque in monitoring and maintaining the plantings.

Despite its location close to the bustling city of Guayaquil and a long history of timber felling, Cerro Blanco Forest Reserve is one of the best remaining examples of biodiversity-rich, seasonally dry forest in the Tumbesian region of south-west Ecuador and north-west Peru. WLT supported tree planting in Cerro Blanco between 2006 and 2010. During this period some 387 hectares of degraded lands were reforested with more than 380,000 saplings of 30 native species.

WLT funds Perfecto Yagual de la Cruz, a ranger at Pro-Bosque through the Keepers of the Wild programme. “Don Perfecto plays an important role in the management of Cerro Blanco and he is an inspiration,” said Denis. Perfecto’s two sons and daughters have now become guides in the reserve.

Pro-Bosque is developing a community ranger programme as a way to give the reserve greater protection. There are currently three groups of community rangers, who are all volunteers living around the reserve. Training is an important element of the programme, for example emphasis is put on developing the rangers’ bird identification and monitoring skills. (There are an estimated 240 species of birds in Cerro Blanco.)

Volunteers play any important role in all aspects of conservation at Cerro Blanco, including research, tourism, monitoring, restoration and education projects in the reserve.

Denis himself started as a volunteer at Cerro Blanco when he was studying biology at Guayaquil University. During his final year he lived in the forest for seven months and volunteered for Pro-Bosque at the same time. He mainly helped with bird research. “Living in the reserve was the best experience of my life!”

In the early days of Pro-Bosque, scientific studies proved to be critically important for conservation in Cerro Blanco. “The research that Eric Horstman (Pro-Bosque’s Director) carried out in in 1992 was a significant turning point for the conservation of the area,” Denis explains, “because it was at this point that people in government recognised the area as being important for biodiversity.”

Having worked for several years in Cerro Blanco as a guide and specialising in birds, Denis is currently researching species inhabiting an 8km stretch of forest in the highlands of the reserve.

Students from the University of Guayaquil are researching bats in the reserve, and there is ongoing research into the Great Green Macaw.

There is potential for other research projects in Cerro Blanco, and Denis believes that one way to further scientific studies in the forest is to develop a formal relationship with University of Guayaquil.

An economy based on conservation

Staff of Pro-Bosque are continuing to develop a tourism programme with 22 guides now working in the reserve. There are plans to expand the number of cabins in the reserve, and work is also ongoing to improve trails, tours and birding for visitors.

Pro-Bosque’s eco-festival of 2013 proved to be a great success. “We only expected 700-800 people so to have 3,400 was exceptional.” By using social networking and contacts to promote the festival, Pro-Bosque avoided paying for any publicity for the festival. Looking ahead to 2014, Denis said: “We are thinking about holding another fair next year. We have learnt lessons this year and next year will have more staff and guides working on the day, and more information promoting tours of the reserve. We will also have more information about donating to the reserve and how to become a regular donor.”

Pro-Bosque is working on proposals to expand Cerro Blanco, and also to create a Jaguar corridor between Cerro Blanco and other protected areas.

“Extending Cerro Blanco is one of our biggest goals,” explains Denis. He also believes that Pro-Bosque needs to make a bigger impact on policy to make sure that the importance of dry forests is promoted more widely.

During his UK trip Denis joined WLT’s stand at Birdfair 2013.

“I’ve had a really amazing experience at the British Birdwatching Fair and here at the Trust’s offices in Halesworth. I really appreciate all the support from WLT during my visit and I’m already planning my return visit next year,” said Denis after the event.

Eric Horstman adds his thanks: “On behalf of Fundación Pro-Bosque, I would like to thank WLT for inviting Fundacion Pro-Bosque to join WLT’s stand at the British Bird Fair and in helping to make Denis’s visit such a memorable and beneficial one.”