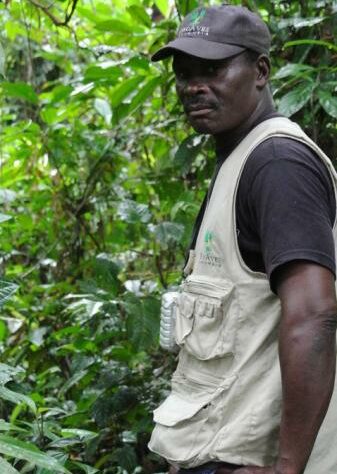 If we don’t act now to save the Golden Poison Frog we may drive this extraordinary species to extinction. Bethan John meets Keeper of the Wild Venancio whose job it is to protect the tiny, deadly creature.

A crowd of schoolchildren race across the dry earth runway to meet our small plane. I step out into a wall of heat. An armed policeman takes my name and passport number, before I’m greeted by Luis Gabriel Mosquera, Deputy Director at Fundación ProAves (ProAves), a World Land Trust (WLT) partner and leading conservation organisation in Colombia.

I’ve landed in the small fishing town of Timbiquí in the Chocó Rainforest on the west side of Colombia.

The people here share their forest with a healthy population of Golden Poison Frogs (Rana terribilis) – a vibrant creature whose two-inch body holds a single milligram of poison. This is a small but lethal dose, strong enough to kill more than 10 humans. Yet this powerful self-defence mechanism is no match for the bulldozer.

The species, which is not found anywhere else on Earth, is listed on the IUCN Red List as endangered. Its habitat is being destroyed at an alarming rate by illegal gold-mining and illicit coca cultivation to produce cocaine.

My first stop is the Rana Terribilis Reserve: a protected area created by ProAves in early 2012, the purchase of which was assisted by WLT, to give a lifeline to the species. Luis Gabriel takes me across town to the river where fishermen are washing their day’s catch, women are scrubbing dirty laundry, and children are splashing and giggling. The river is the hub of the community. But the extraction method used by gold miners pollutes the rivers in this region with toxic mercury and siltation – resulting in a drastic reduction of fish populations.

As our boat pulls up to the reserve on the opposite bank we are greeted by Keeper of the Wild Venancio Flórez López, the reserve ranger funded by WLT. Together we make our way into the reserve but are immediately stopped by an army official who wants to know what we’re doing there. Over the years, armed conflict has plagued the region, and the military, stationed at the entrance of the reserve, monitor the movement of people in and out of the jungle to increase security.

“The worst part of my job is that there is always the fear of rebel groups around the reserve”
(Venancio Flórez López, Keeper of the Wild)

Venancio lives in the nearby village of San Miguel. He is is the only ranger in the reserve and patrols the area alone. “The worst part of my job is that there is always the fear of rebel groups around the reserve,” he tells me, adding, “To make the situation worse, the army doesn’t understand that I’m here to protect the frog, which makes it difficult to move freely around the reserve.”

This time we’re lucky and there’s no problem; soon we’re tramping through thick mud and swatting mosquito after mosquito. Venancio stops in the trail and points to a tree with his machete: “This tree is poisonous”, he says. “The indigenous people used to combine the poison of the tree with the poison of the frog and use it for hunting with blow pipes. It’s very dangerous; the poison can paralyse your neck.” I’m surprised that the frog needs help from a poisonous counterpart, seeing as its skin is drenched in alkaloid poison (batrachotoxins) that prevent nerves from transmitting impulses, leaving the muscles in an inactive state of contraction. This leads to heart failure: death comes within minutes.

We’ve been in the reserve for less than an hour before Venancio is clambering through the thick vegetation in search of the frog. “Hear that noise?”, asks Luis Gabriel, “It sounds like a cricket, but that’s the frogs’ song. Don Venancio has become an expert at tracking it down by its vocalization.”

“Having one of the world’s deadliest creatures in the palm of my hand is not an opportunity I can miss… wearing gloves, of course.”
(Bethan John, WLT’s Roving Reporter)

He’s right: within minutes Venancio is back at our side. As he slowly opens his cupped hands a bright orange frog leaps onto the forest floor. Instinctively, I take a step back. “Do you want to hold it?” asks Luis Gabriel, with a grin. I don’t have to think twice. Having one of the world’s deadliest creatures in the palm of my hand is not an opportunity I can miss… wearing gloves, of course.

I bring the frog up to my eye-level. He sits calmly in the centre of my hand, motionless, apart from the rapid movement of his small air sacs. I stare at him, trying to comprehend that this tiny creature could kill me. I had thought it would feel like holding a hand grenade. I had expected my heart to race, to feel a rush of adrenaline, some kind of terror.  But as I look at his eyes – huge unblinking pits of blackness, in stark contrast with his orange skin – all I feel is great sadness. A wave of child-like anger hits me. I don’t want this little fellow to be the last of his kind in the wild. But if we don’t act, the Golden Poison Frog faces extinction.

ProAves needs support to escalate conservation and community efforts within the region. By donating today to WLT’s Keepers of the Wild programme you can help save the incredible Golden Poison Frog from the edge of extinction. 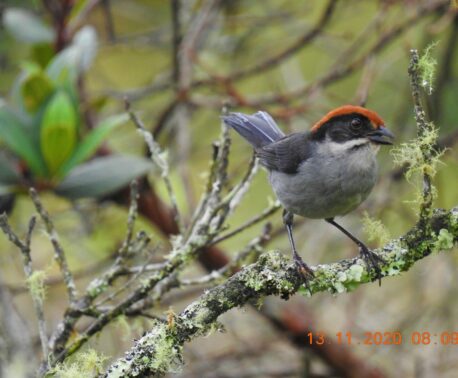