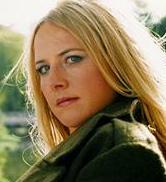 Sarah Class is one of Britain’s most sought after film score composers with a strong association with wildlife and natural history.

She has a long standing relationship with the BBC, and has composed music for prominent documentary programmes.

In 2013 she received worldwide acclaim for the orchestral score for the BBC series Africa, narrated by Sir David Attenborough, one of the patrons of World Land Trust. “What wonderful music!” said Sir David on first hearing Sarah’s soundtrack.

Sarah is a rising star, a singer and songwriter as well as a composer. A Musical Safari with Sarah Class will be a mesmerising mix of personal experiences, film and live performance.

During the first half of the evening, in conversation with Bill Oddie, Sarah will use film clips and reminiscence to describe her career in classical music and composition. Sarah will perform live in the second half.

Bill Oddie is a member of WLT’s Council and a keen supporter of the Trust. All proceeds from the evening will support WLT’s conservation work.

The performance will take place on Friday 25 October 2013 at 7.30pm at The Cut in Halesworth. Tickets are £12.50, available online from Halesworth Arts Festival »