Poverty, cocaine and conflict: is conservation a solution to some of Colombia’s problems? SEARCH NEWS 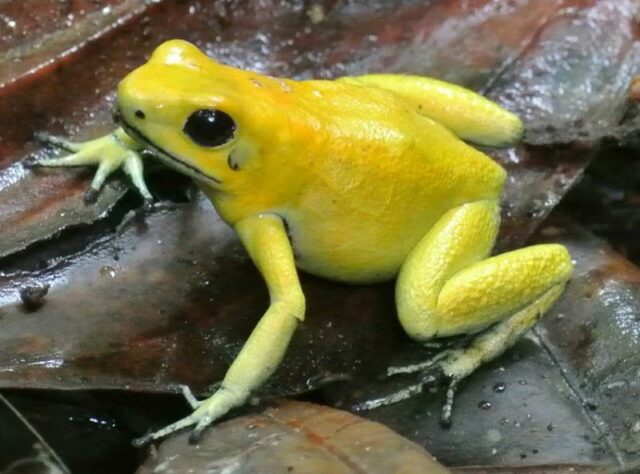 In the Chocó of Colombia people are suffering the aftermath of years of armed conflict. Although living in relative peace, they watch helplessly as incomers destroy the Chocó’s natural resources in pursuit of gold, timber and cocaine. But deep in the rainforest a tiny creature offers a golden opportunity to protect the threatened jungle habitat. Bethan John reports on a conservation initiative supported by World Land Trust (WLT).

Our light aircraft bumps above the swathe of Chocó Rainforest in westernmost Colombia. As I look out over the explosions of vegetation that rise up in great bursts of fertility, a man sitting in front of me taps on the window to get my attention. He gives me a thumbs up sign and a beaming smile, clearly proud of the beauty that he calls home.

We’re heading to Timbiquí, a small fishing town in a remote area of the Chocó. The town is inhabited for the most part by around 5,000 Afro-Colombian people, descended from African slaves imported to the Americas by the Spanish during the colonial era.

“Relative peace for the Chocó brings with it the destruction of natural resources on which local people depend.”
(Bethan John, WLT’s Roving Reporter)

Timbiquí is in one of the poorest regions of the country, recently plagued by armed conflict that reached a climax between 2008 and 2011 when the area became a hotbed of coca cultivation.

According to some estimates, more than 50,000 people became internal refugees within Colombia during this period. In 2007, even before the escalation of violence, the Colombian media reported that 50 children starved in less than three months in the region.

The remoteness of the Chocó and its dangerous reputation had, until recently, protected the rainforest from destruction. Times are changing, however, and flying west from city of Cali to Timbiquí the scars of deforestation are clear to see.

The search for gold and timber in the region is now rife, bringing a wave of exploitation from outside companies whose extraction methods are polluting rivers with toxic mercury and siltation – with catastrophic effects on fish populations.

It’s a depressing situation: relative peace for the Chocó brings with it the destruction of natural resources on which local people depend.

Despite this, there is hope. The unique forest of the Chocó is a biodiversity hotspot supporting the single greatest concentration of endemic birds, amphibians and orchids on the planet.

In addition, it is home to an extraordinary creature – the Golden Poison Frog (Rana terribilis) – one of the world’s deadliest animals that is found nowhere else on Earth. The skin of this small, vibrant frog is drenched in enough poison to kill more than 10 people, but this incredible species is being driven to the edge of extinction.

The threats faced by this rare and deadly amphibian – in particular, loss of habitat to mining, development and illicit coca production – have enabled Fundación ProAves (ProAves), a partner of the WLT and Colombia’s leading conservation organisation, to set up a project in Timbiquí to protect the frog’s habitat.

With support from WLT, and working with local people, ProAves staff have created the Rana Terribilis Reserve. The reserve protects habitat for the Golden Poison Frog and also demonstrates that nature conservation and community development can create environmental and social change.

The work is in its early stages, but ProAves has a track record of working with local people to improve their livelihoods and standard of living. Women for Conservation is just one initiative that is empowering poor communities and giving them greater financial security.

Our plane skims the treetops and then skids along the dry earth runway. It feels as if we’ve landed in the heart of the jungle. My heart races at the prospect of coming face-to-face with the Golden Poison Frog, one of the planet’s most awe-inspiring creatures, a species that could give new hope for the people that share its rainforest.