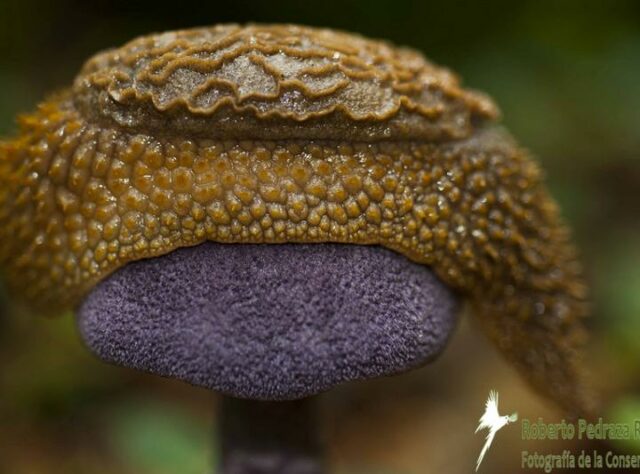 A new family of slug has been discovered in the cloud forests of Sierra Gorda, thanks to assistance from Roberto Pedraza of Grupo Ecológico Sierra Gorda (GESG), World Land Trust‘s (WLT) conservation partner in Mexico.

Earlier in the year, experts Edna Naranjo-Garcia and Fred G Thompson confirmed the existence of a new family of mollusc endemic to Mexico. Their published description of a dart-bearing helicoid slug acknowledges the role played by Roberto, GESG’s Technical Officer, who invited Dr Naranjo-Garcia to see the slugs in situ during the rainy season in Sierra Gorda in 2005.

Belonging to the Superfamily Xanthonychoidea, the slug is superficially hedgehog-like, and the family has been named Echinichidae. Within the family, three species have been described – Echinix ochracea, Echinix granulata and Echinix rugosa – but so far only Echinix rugosa has been recorded in reserves managed by GESG and supported by WLT.

“I am delighted that such a splendid slug has been found in reserves that WLT supports,” said John Burton, WLT Chief Executive. “This discovery demonstrates, once again, the highly biodiverse environment in Sierra Gorda and the importance of purchasing land there and protecting it for conservation.”

“This discovery demonstrates, once again, the highly biodiverse environment in Sierra Gorda and the importance of purchasing land there and protecting it for conservation.”
(John Burton, WLT Chief Executive)

Slugs play a vital role in the forest ecosystem by eating dead leaves, decaying vegetable material and eating fungi. They are also important prey for a myriad of birds and mammals.

Since 2011 World Land Trust has been raising funds to purchase land in remote parts of Sierra Gorda where there are high levels of biodiversity.

Sierra Gorda, which forms part of the Sierra Madre Oriental mountain range, covers a third of the central Mexican state of Queretaro. In total, 946,000 acres (383,000 hectares) form the Sierra Gorda Biosphere Reserve, but 97 per cent of land within the biosphere is privately owned and therefore vulnerable to exploitation for agriculture (maize cultivation and cattle grazing), logging and hunting.

To date, WLT support has helped create eight reserves in Sierra Gorda, a total of some 5,596 acres (2,264 hectares). These reserves, under the permanent protection of GESG, are in remote areas and protect a Jaguar / Puma wildlife corridor which runs along a north south axis along the east side of Sierra Gorda.

World Land Trust also supports a ranger in Sierra Gorda, Abel Reséndiz, through the Keepers of the Wild programme.

You can help make scientific discoveries possible in Sierra Gorda by donating to Buy an Acre or Keepers of the Wild.