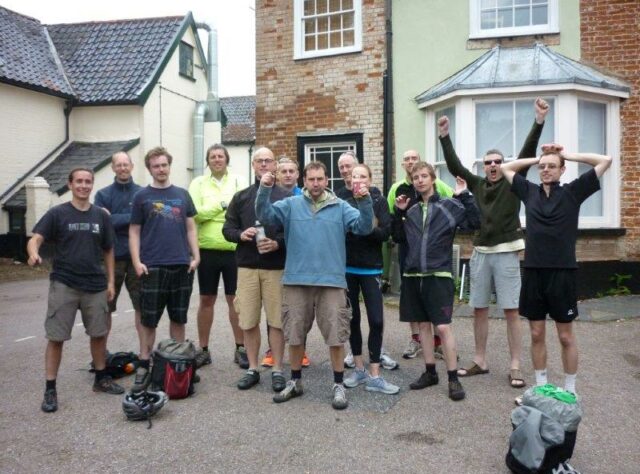 From the modest to the mind blowing, each and every fundraising effort helps us carry out the important and urgent task of saving the world’s most biodiverse habitats.

So far in 2013, supporters’ efforts to raise money for World Land Trust (WLT) have been outstanding. We salute all those who have taken part in fundraising activities.

Thank you to the teams and individuals mentioned below, to those we have not mentioned, and to all those who encouraged and sponsored our fantastic fundraisers.

April was a busy month. Tom Pope ran the London Marathon on 21 April 2013 and raised nearly £500. Sabrina McNally ran the Stratford upon Avon Half Marathon on 28 April 2013 with co-runner Sam, and raised just under £150. Also in April, Guy Thompson ran the Paris Marathon and raised more than £175.

This year, for the first time, WLT had five charity places in the Great Manchester Run. On 26 May, a swelteringly hot day in Manchester, Lee Stuart, Kate Mutton, Robert Salisbury, Christina Ballinger (WLT’s Writer/Editor), and Peter Foster (a former WLT volunteer), ran for rainforests. Together the team raised £800.

Another runner, Jane Shadforth ran the Cotswold Way Challenge in August. She ran a magnificent 100 miles over four days and raised £390 for four charities including WLT.

Meanwhile Jesse and Norah Davies are working hard to meet their 2013 challenge – to raise £2,013 by running 2013 km during the year. As the nights draw in and temperatures drop, our message to Jesse and Norah is don’t stop now, you’re nearly there!

Daniel Codd took part in the Tough Mudder Yorkshire on 7 and 8 September and survived! He has raised £250 so far.

Looking ahead, we wish good luck to Ruth Stanton-Saringer, a former WLT Communications Officer, who is taking part in the Great South Run on 27 October. WLT has charity places available for the same event, so if you fancy running 10 miles through Portsmouth and the historic dockyard to raise money for WLT, please contact Gary Roberts (groberts@worldlandtrust.org).

For a third year in a row the valiant CBRE cyclists have raised funds for WLT and three other charities. This year, at the end of May, the team cycled from Munich to Trieste. CBRE’s fundraising page is still open for sponsorship and staff will present WLT with the final amount in early October, a donation likely to be in the region of £15,000. Thank you to all the cyclists including Richard Biffen who, though not a member of CBRE staff, joined the team.

In June Dan Bradbury, WLT’s Head of Digital Communications, joined the Suffolk Climate Change Partnership (SCCP) annual cycle ride to raise funds for Buy an Acre in Bolivia. So far the SCCP team has raised £1,400 which will be used to extend the Barba Azul Nature Reserve in Bolivia’s Beni savanna.

Back in April Toby Gibson, WLT’s former Web & IT Manager, embarked on a 4,000 mile Round Britain cycle ride. So far he has raised more than £430.

Meanwhile Clare Southern and her fiancée Sam are chasing horizons on a motorcycle tour of Africa and the Americas. Their blog describes the highs and lows of travelling through the countries of north Africa, and we admire their stamina and resilience.

In May Brian Harvey went sky diving for WLT, and raised more than £50. We wish good luck to Hannah Hartley and Hamish Kerr who will be sky diving later in the year.

On 21 June keepers from Paradise Wildlife Park, Broxbourne, bungee jumped to raise money to conserve habitat for tapirs in the rainforests of Ecuador. In July, they handed WLT a cheque for £2,500 and have raised more funds through their JustGiving page.

On a related subject, we are particularly grateful to Anthony Long for his ongoing fundraising efforts to celebrate World Tapir Day. His online fundraising page has been running since 2010. His target is £10,000 and so far he has raised £4,500.

Alex Wotherspoon, Phil Semple, Lizzie Laessing and Liz Kalaugher have raised more than £470 for WLT by walking the length of the river Thames from its source. “Rumour has it that the river Thames starts near Cricklade and flows to London. As scientists we don’t like to take things on trust so we’ve decided to check this out by walking nearly 150 miles in five days along the so-called Thames Path,” the walkers said before the event. We commend their spirit of discovery and a fine fundraising effort for WLT.

Chris Redston, and Adela, his new wife, are deeply committed and generous WLT supporters. We congratulate Chris and Adela on their marriage on Saturday 18 May at the London Wetland Centre and thank Chris for donating £5,000 to the Bolivia Buy an Acre fund for Adela’s birthday on 25 May.

On other happy occasions, Ali Leith & her husband Niall’s wedding in April raised £314 and Lucinda Glover and Edward Montgomery’s wedding on 11 May 2013 raised £2,368. Congratulations and thanks to you as well.

This year’s prize for most creative fundraising idea goes to ceramicist Clare Twomey and the Foundling Museum’s ‘exchange good deed’ project. Clare made 1,000 mugs for the Foundling, all with a different challenge on the base. In July we were delighted to receive a donation from Carol Bliss whose cup asked her to donate to WLT. More about this novel idea at: Exchange at the Foundling Museum.