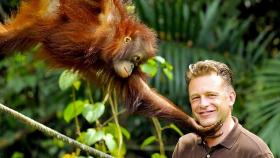 Championed by Chris Packham, one of WLT’s Patrons, Big Match Fortnight starts on 2 October 2013 and runs until 16 October 2013. During the fortnight all donations will be matched by funds generously offered by a small group of donors.

Donations can be made online, over the phone by debit or credit card, by cheque or with Charities Aid Foundation vouchers.

WLT launched Big Match Fortnight after the results of a recent survey suggested that WLT supporters were more motivated to make donations knowing they were going to be matched but that many are put off if donations have to be made online.

One respondent said: “Matched funding is vital to make money go further” and another said: “Yes, [I would donate] if it did not involve computer payments.” These sentiments are echoed in many of the survey responses.

Other respondents told us they are reluctant to donate if the match funding is limited or if the time period for donating is too short or too close to Christmas.

Some match funding initiatives have only limited match funding, but this is not the case with Big Match Fortnight. So far, £137,500 has been pledged in match funding and new pledges are being received daily. However, if funds raised exceed this amount, another loyal supporter of WLT is considering matching over and above WLT’s existing match fund.

We are extremely grateful to those who have pledged to match funds, because without them there would be no Big Match. If Big Match Fortnight is a success in 2013, WLT will make it an annual fundraising event.

Several supporters have signed up for an email reminder to donate during the fortnight, and some of you have even sent donations in advance! If donors request it, we are happy to hold donations until Big Match Fortnight so that they can be matched.

Thank you to all of you who have told us you will donate during the fortnight and who are busy spreading the word about Big Match Fortnight and WLT’s Borneo Rainforest Appeal.

WLT is aiming to raise one million pounds to secure habitat along the banks of the Kinabatangan River in Sabah, Malaysian Borneo. The land, once protected, will provide a safe corridor for Orang-utans, whose populations have been decimated due to loss of forest habitat.

Funds from the Borneo Rainforest Appeal will be managed in partnership with Hutan, WLT’s conservation partner in Malaysia.

The Borneo Rainforest Appeal builds on WLT’s successful effort to raise funds to protect another wildlife corridor for Orang-utans in Sabah in 2012.