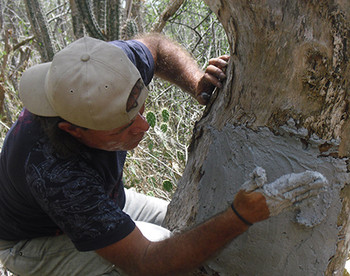 A record number of Yellow-shouldered Parrots have fledged this year in Margarita Island, Venezuela.

This success is due to protection measures taken by Asociación Civil Provita (Provita), with support from World Land Trust’s (WLT) Keepers of the Wild programme.

Thanks to the efforts of Provita’s rangers, 77 chicks fledged in 2013 and are now living among the wild population of Yellow-shouldered Parrots (Amazona barbadensis), which are listed as vulnerable on the IUCN Red List.

Since 2012 WLT has been supporting Keeper of the Wild, Pablo Antonio Millán, in his work to protect the nesting site.

The nests of Yellow-shouldered Parrots are particularly vulnerable. The parrots build nests in the cavities of tree trunks, but the nests are often spoiled by poachers looking for iguanas. So, prior to the breeding season, rangers repair any damaged nests by applying net covered in nontoxic plaster to make sure that the parrots have enough places to breed.

During the 2013 breeding season, Pablo and six other rangers successfully protected 16 nests.

Provita has been working in conservation on the island for 24 years, and staff are delighted with this year’s successful breeding season. At almost twice the average of 40 chicks per year, 77 fledglings is a record.

“Provita’s rangers are right to feel proud of this year’s breeding season,” said Ruth Canning, WLT’s Conservation Programmes Manager (Americas Region). “It is thanks to their bravery and hard work that Yellow-shouldered Parrots are now able to breed safely.”

Every year, between March and August, Yellow-shouldered Parrots raise their chicks in Macanao, Margarita Island. And every year poachers and traffickers attempt to remove chicks from their nests to sell into the illegal pet trade.

Since 1989 Provita has been protecting the main nesting site, and recruiting and training young men from the local communities to work as rangers.

The ranger’s job is risky, as poachers can be aggressive. A couple of years ago Provita’s team was attacked by armed poachers, who fired warning shots and stole 16 chicks. In 2012, early in the season, poachers damaged 40 per cent of the nests, even before the eggs hatched.

During the 2013 breeding season, although unknown people around the area caused suspicion, no poaching took place. The local police and National Guard made several visits to the area, reinforcing the security.

The Yellow-shouldered Parrot has its stronghold in the Dry Forests of Margarita Island, Venezuela, specifically in the Macanao Peninsula, in the west of the island.

Recognising the significance of the habitat and biodiversity of the Macanao Peninsula, in 2009 WLT supported the purchase of 1,809 acres (732 hectares) of threatened dry forest, which provides vital roosting sites for the Yellow-Shouldered Parrot.

In 2012, WLT successfully raised £10,000 to protect the nest site. Since then, WLT has provided ongoing support for Keeper of the Wild Pablo.

World Land Trust raises funds for the employment of rangers to protect and monitor the nature reserves that WLT has helped create. You can support this important work by making a donation to Keepers of the Wild.