Landmark fund is a lifeline for Paraguay forest SEARCH NEWS 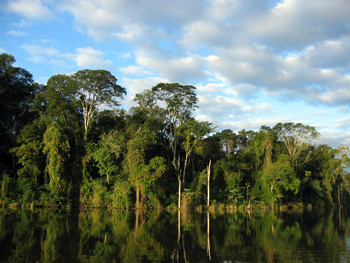 World Land Trust (WLT) has played a key role in setting up the San Rafael Fund for Biodiversity Conservation, worth one million US dollars.

The endowment fund will provide a lifeline for the longterm conservation of San Rafael, a critically important site in the Atlantic Rainforest of eastern Paraguay.

WLT has a long-standing commitment both to Guyra Paraguay (Guyra) and to protecting San Rafael forest. WLT has worked in partnership with Guyra for nearly a decade and WLT’s actions to date include land purchase, support for staff and infrastructure, and initiatives to benefit local communities and to ensure protection of ecosystem services and carbon stocks.

In addition, WLT will now manage the San Rafael endowment fund, using its experience to generate income dedicated to sustaining Guyra’s ongoing conservation work in the Guyra Reta Reserve within the forest.

“The endowment fund is hugely important. I am delighted that World Land Trust has helped bring it into existence, and is able to provide ongoing management”
(John Burton, WLT Chief Executive)

John Burton, World Land Trust Chief Executive, described the fund as a landmark for conservation: “San Rafael is the largest surviving remnant of Atlantic Rainforest in Paraguay, and an area critical for many threatened endemic species. The endowment fund is hugely important, and I am delighted that World Land Trust has helped bring it into existence, and is able to provide ongoing management.”

Alberto Yanosky, Executive Director of Guyra Paraguay, said: “It is a great pleasure for Guyra Paraguay finally to put the endowment to work with the support of WLT and GCF. Support for San Rafael´s long term financing has been needed for years, and this contribution will help protect these areas of great importance for Paraguay and the world.”

“Support for San Rafael’s long term financing has been needed for years, and this contribution will help protect these areas of great importance for Paraguay and the world”
(Alberto Yanosky, Guyra Executive Director)

At the heart of Paraguay’s most important remaining tract of Atlantic Forest, the Guyra Reta Reserve covers 17,374 acres (7,031 hectares) of forest. The reserve protects the upper watershed of the Tebicuary River, one of the larger tributaries of the Paraguay River, plus an important recharge area for the Guarani aquifer, the largest freshwater aquifer in South America.

The whole territory of San Rafael and the private Guyra Reta Reserve are home to the indigenous Mbyá-Guaraní culture. An estimated 2,000 Mbyá-Guaraní live in the region and engage in small-scale agriculture, traditional hunting and gathering of natural resources.

“The endowment will ensure not only the sustainability of this important forest, but also the conservation of biodiversity through collaborative work with local communities”
(Christopher Stone, GCF Managing Director)

“The establishment of the endowment for the Guyra Reta Reserve will ensure not only the sustainability of this important forest, but also the conservation of biodiversity through collaborative work with local communities. Effective management of the conservation area by Guyra will provide communities with benefits including clean air, fresh water and food,” said Christopher Stone, Managing Director for GCF.

Species endemic to the Atlantic Rainforest

San Rafael is world famous for its bird life. It became Paraguay’s first Important Bird Area (IBA), and was only the second IBA to be formed in South America.

More than 400 bird species have been recorded in San Rafael, more than at any other site in Paraguay, and the area is critical for the conservation of endemic species (those found nowhere else).

Among the Atlantic Forest-endemic species found in San Rafael is the Black-fronted Piping Guan (Pipile jacutinga), and the Vinaceous-breasted Amazon (Amazona vinacea). Both birds are registered as endangered by IUCN and both are threatened by habitat loss and, in the case of the guan, by poaching.

Conservation International builds upon a strong foundation of science, partnership and field demonstration, to empower societies to responsibly and sustainably care for nature, global biodiversity and the long term well-being of people. Founded in 1987, CI marked its 25th anniversary in 2012. More »

Conservation International’s Global Conservation Fund finances the creation, expansion and sustainable financing of protected areas. GCF has supported Guyra’s efforts in San Rafael since 2003, providing more than half a million US dollars in funding to support management costs, land acquisition and technical assistance and training. More »