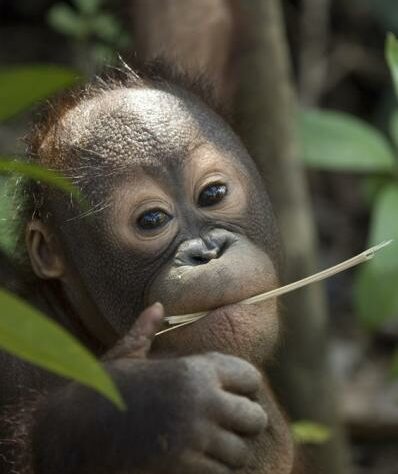 World Land Trust (WLT) has launched its biggest ever appeal aiming to raise one million pounds to secure a wildlife corridor for Bornean Orang-utans in Sabah, Malaysian Borneo.

The launch of the appeal was held at the Linnean Society in London, and the event was introduced by a short film of a male flanged Orang-utan building its nest for the night.

“Orang-utans make a new nest every night, but few people are lucky enough to witness or film it,” said Mary McEvoy, WLT’s Conservation Programmes Manager (Africa and Asia Regions), who made the film on a recent visit to Sabah. “We showed the film at the launch of WLT’s Borneo Rainforest Appeal to demonstrate the vital importance of forest habitat for Orang-utan survival.”

Special guest at the launch was leading conservationist and Bornean Orang-utan specialist, Dr Isabelle Lackman. Isabelle is Co-Director of Hutan, WLT’s conservation partner in Malaysia. She spoke passionately about the need to create a vitally important wildlife corridor along the Kinabatangan River.

As a result of logging and agricultural development including Oil Palm cultivation, 90 per cent of Sabah’s native Orang-utan populations has been wiped out in the past 100 years.

Sabah is one of the last remaining Orang-utan strongholds, and there are currently thought to be some 1,000 Orang-utans in Lower Kinabatangan. On the surface this seems a large number, but as Isabelle explains: “The Orang-utan populations are highly fragmented, and groups range from between five individuals to more than 200. Some groups are simply too isolated to be viable.”

However – and this is where WLT comes in – with strategic purchasing, it’s possible to secure, one by one, small parcels of land to form a corridor between existing protected areas that are currently separated. Linking fragments of forest enables isolated groups of Orang-utans to form larger, more viable populations. And many other species benefit as well.

Journalist and WLT supporter, Dominic Belfield attended the launch. “Dr Isabelle Lackman is an impressive wildlife advocate and her presentation was an unmissable chance to get a grasp of what Hutan is up against in Sabah, while affording a real sense of hope for what can be achieved by intelligent, determined, well motivated people,” said Dominic.

Isabelle has lived and worked in Sabah for 15 years and has seen an amazing transformation in people’s view of conservation: “After a few years, local people start realising the effects of industrial agriculture. They come to realise that they are losing out, as well as the wildlife. And now the perception of conservation has changed. People know what’s going on and they have the motivation to protect the remaining forest.”

Nicola Davies, author and WLT ambassador, visited Sabah in 2012. She gave her wholehearted support to the appeal. “Sabah is such a wonderful place. Despite the fact that the forest is no longer primary, it is teeming with bird life, and it’s possible to see primates so easily. The local people are driving wildlife conservation initiatives and are so willing to talk, not just about conservation, but also about the problems they face, and about their vision for the future. Local people are behind what Hutan is doing, their aims are consistent with Hutan’s and World Land Trust’s.”

WLT Trustee, Dr Simon Lyster, called on WLT supporters to back the Borneo Rainforest Appeal. “We are launching WLT’s largest appeal ever,” said Simon, “and we are focusing our fundraising efforts on WLT’s Big Match Fortnight, which runs from 2 – 16 October. We have some incredibly generous supporters who have pledged £125,000 to match public donations of the equivalent amount.” If WLT can successfully raise £250,000 during Big Match Fortnight, there is another supporter who is prepared to bring the total raised to £300,000.

As Simon put it: “We need help from you our ambassadors and supporters to spread the word so that we can raise funds that are so urgently needed.”

The Borneo Rainforest Appeal: aiming to raise One Million pounds was launched on 13 August 2013.