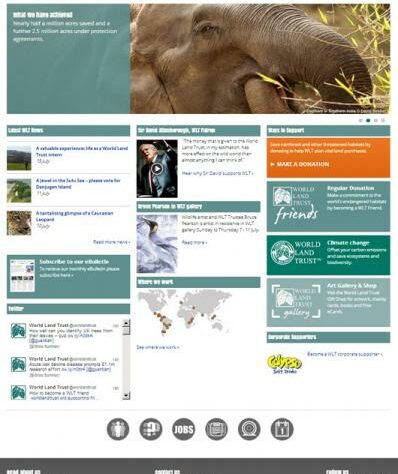 World Land Trust (WLT) has received a positive response to its new look website, which was launched on 8 July.

The overall appearance of the site has been improved. It now has a more up to date feel, with a new design that is clean and light. The new flexible site is responsive to mobile devices, making better viewing from a mobile phone or tablet.

Navigation and menus have been upgraded, so that it is easier for visitors to find their way round the site. Key areas – WLT Gallery, WLT Friends and Ecosystem Services – are now much more accessible from the home page, and icons rather than text are used to add links to other areas of the site such as webcams.

“Our website is an essential means of communicating with supporters and enabling them to make donations. It is therefore extremely important that we continually refresh the site to accommodate new technology,” explains John Burton, WLT’s Chief Executive.

“Our website is an essential means of communicating with supporters and enabling them to make donations. It is therefore extremely important that we continually refresh the site to accommodate new technology.”
(John Burton, WLT Chief Executive)

At times in recent years the rapid rate of technological change has seemed unstoppable – and all but impossible to keep up with. Nonetheless, since its inception, World Land Trust has recognised the importance of communications technology and has often been among the first to adopt new systems and practices.

For example, WLT was one of the first charities to use a fax machine and email and one of the first to develop a website. When online donations became possible, WLT upgraded its website accordingly, and switching to a content management system in 2011 was another significant development.

More than a decade ago, John Burton, WLT’s Chief Executive, was calling on government to provide faster broadband in rural areas so that online commerce and communications were not just available in Britain’s cities. And while broadband is still slow in rural areas, and in some places mobile phone connections are still not available, overall the trends are positive.

In recent years mobile phones and other mobile devices have taken centre stage, and WLT’s new flexible website has been designed to accommodate this development. Today more than 1.2 billion people access the internet from a mobile phone. One in eight page views are from mobile devices and 31 per cent of internet users say they “mostly” go online using their phones.

Global mobile traffic has risen exponentially, and now represents roughly 13 per cent of internet traffic. Just three years ago, in 2009, that statistic was a measly 1 per cent. It edged up to 4 per cent in 2010, and it hit 13 per cent in November 2012, according to StatCounter Global Stats.