A tantalising glimpse of a Caucasian Leopard SEARCH NEWS

Leopards are elusive animals at the best of times but in the vicinity of the Caucasus Wildlife Refuge (CWR) it was eight years since one had been seen. If it hadn’t been for traces of hair and a scat found in the CWR and proven to belong to a Caucasian Leopard, we might still be wondering if they really did exist.

As of last week, we came another step nearer to seeing a leopard up close. But the leopards are determined to live up to their elusive reputation and so far have only shown us a tail!

Manuk Manukyan, FPWC’s Coordinator of Conservation Projects, is one of the few people to have seen a Caucasian Leopard in the wild, being lucky enough to catch sight of one nearly a decade ago. He told WLT: “The leopard is no longer a ghost! We know he (or she) is there and that the habitat is suitable. It is very quiet and there is plenty of prey. We will adjust the cameras and sooner or later we will get pictures of the entire animal.”

Since the reserve was created in 2010, FPWC staff – some of them funded by WLT’s Keepers of the Wild programme – have diligently recorded leopard tracks and signs and used this information to locate camera-traps provided by WLT near to where the leopards are thought to roam. At the same time, FPWC staff have made every effort to protect the Caucasian Leopard’s habitat and prey, in particular Bezoar Goats, wild boars and Armenian mouflon.

”The leopard is no longer a ghost! We will adjust the cameras and sooner or later we will have pictures of the entire animal.”
(Manuk Manukyan, Coordinator of Conservation Projects, FPWC)

Mary McEvoy (née Tibbett), WLT’s Conservation Programmes Manager (Asia and Africa Regions) said: “At last, the efforts of FPWC staff have paid off. The whole WLT office was very excited to see the footage so I can only imagine how elated all at FPWC must be feeling. This is a great moment for wildlife conservation in Armenia.”

According to World Wide Fund for Nature (WWF) Armenia, there are just 3 – 5 individuals recorded in Armenia (some of them are migratory). Each leopard needs habitat of some 44,500 – 60,000 acres (18,000 – 25,000 hectares), and their populations have been decimated by hunting and poaching, and degradation of habitat caused by livestock grazing, plant gathering and deforestation.

The Caucasian Leopard has only been photographed in the wild in Armenia on two occasions, in 2005 and 2007. Those leopards had entered Armenia from Iran in territory much further south of the CWR.

The leopard’s stronghold within Armenia is the rugged and cliffy landscape of Khosrov State Reserve and surrounds. The Caucasus Wildlife Refuge is located on land adjoining the Khosrov State Reserve, south-east of the capital Yerevan on the south-western slopes of the Geghama mountains. 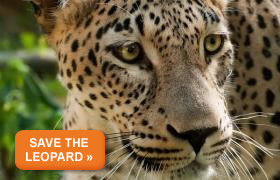 WLT is currently raising funds to lease land to extend the Caucasus Wildlife Refuge (CWR) and to improve monitoring and protection measures within CWR. With this protection in place we feel sure that in the future there will be more camera-trip images of leopards (hopefully with cubs!)

Into the wild: Battle to save the Euro-leopard » (Simon Barnes writing in The Times )

By Boris Vanyan, FPWC Ranger Armenia, Tigranashen village, Ararat region  If there is one thing that has become abundantly clear …