We did it for tapirs! Zoo keepers were ‘really scared’ SEARCH NEWS 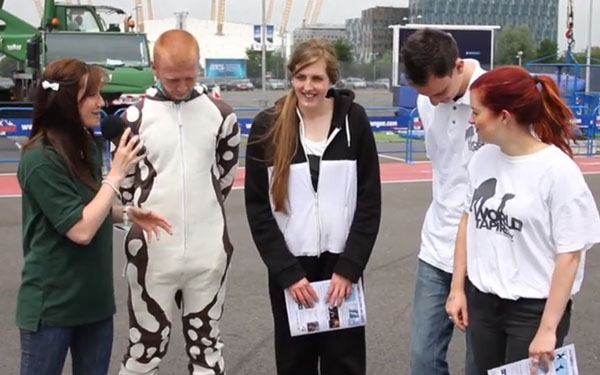 Plummeting to earth upside down, and dressed as tapirs, Paradise Wildlife Park keepers showed bravery indeed – and have so far raised nearly £2,000 for World Land Trust (WLT) to save habitat for tapirs in Ecuador.

“I have a massive love for tapirs”, says James Cork, who leads the tapir team at Paradise Wildlife Park, adding “I try to educate our visitors about these fantastic animals at every opportunity.”

James is Head of Paddocks Section, where the park’s tapir family has its home. He, together with fellow keepers, Carrie Arnold and Callum Bullworthy, decided that this year they would do something extra special to raise funds in celebration of World Tapir Day (27 April).

The team wanted to raise funds for WLT to save habitat for these seemingly prehistoric animals that look pig-like but are in fact ancient relatives of the horse and rhinoceros. Tapirs have lived on the earth for some 35 million years, yet face extinction in the wild today.

Rising to the challenge

Planning their fundraising back in April the keepers came up with the idea of a giant bungee jump plunge. It seemed a good idea at the time! But when 21 June came round they all admitted to a touch of terror before being crate-lifted to the top platform of a crane that seemed nearly as high as the adjacent London Eye.

Emma Blackwell, Zoo News presenter at Paradise Wildlife Park interviewed James, Carrie, Callum and co-jumper Emily just before they were airlifted into the sky. Their fear and excitement is recorded in a great video shot before and after their jump, and we are all impressed by their courage and commitment.

The ‘tapir team’ are still collecting donations, and we look forward to hearing the final result. WLT is delighted to be saving tapir habitat in Ecuador to mark the team’s passion and bravery. Thank you again and congratulations to James, Carrie, Callum and Emily.

Zoo keepers take the plunge to raise funds for tapirs »