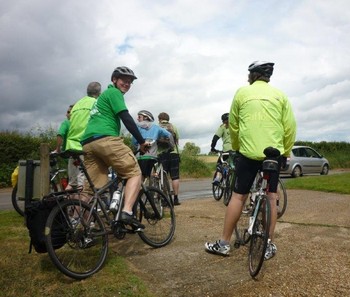 Undeterred by storm clouds and showers, the doughty SCCP cycle team completed their Tour de North East Suffolk in good heart – and have so far raised more than £1,200 for World Land Trust (WLT).

The charitable purpose of the ride was to raise funds for WLT’s Buy an Acre project in Bolivia.

“World Land Trust does fantastic work, and we are delighted to be able to raise money for the Beni Savanna project in Bolivia,” said Anna Martin of Groundwork Suffolk, who helped organised the ride and also took part in it.

Dan Bradbury, WLT’s Head of Digital Communications, was among the team of 12 cyclists. He said: “Well done to the guys who planned the route – although I could have done without a couple of the hills and the slight detour down the A12! It was good to see parts of the Suffolk countryside that I have never visited, and I will certainly be heading back to the Sweffling White Horse at some point soon.”

The 59 mile ride started and finished at WLT’s offices in Halesworth, and included sights of local interest and stops at businesses that SCCP has supported.

From Halesworth the route took in Westleton Heath and Dunwich, before heading out to Leiston to visit the Long Shop Museum where there was a short rest break.

The cyclists then continued on, winding their way through the beautiful (if not a little damp) Suffolk countryside, visiting places such as Snape Maltings, the Froize Inn where a most enjoyable lunch was had, past Glemham Hall and then touching on the outskirts of the castle town of Framlingham.

After a stop at the Sweffling White Horse and a tour of their facilities, the final stop was in sight, the Marybelle Farm in Walpole, where a lovely selection of dairy ice cream was laid on for sampling.

The charity ride was organised by Suffolk Climate Change Partnership (a network of organisations supporting Suffolk’s communities, businesses and residents to reduce carbon emissions, realise the economic benefits of reducing energy consumption and adapt to the future impacts of climate change).

The cyclists who joined the team all did so in their free time to raise funds and to increase awareness of both the Trust and the Climate Change Partnership.

It was a great day by all accounts, with sun, rain (quite a bit of rain!), and even some repairs, but everyone who started, finished!

You can help the team reach their fundraising target of £2,000 by donating to https://www.justgiving.com/sccp2013bikeride/

Gallery of photos of the ride »

WLT is working in partnership with Bolivian NGO Asociación Armonía to protect Beni savanna by extending the existing Barba Azul Nature Reserve in the south western corner of the Amazon basin. The Barba Azul reserve is the only site in the world with large groups of endangered Blue-throated Macaws. It is also home to several other species endemic to this area of Bolivia. WLT is raising funds to expand the reserve through its Buy an Acre appeal.