In love with Axolotls SEARCH NEWS 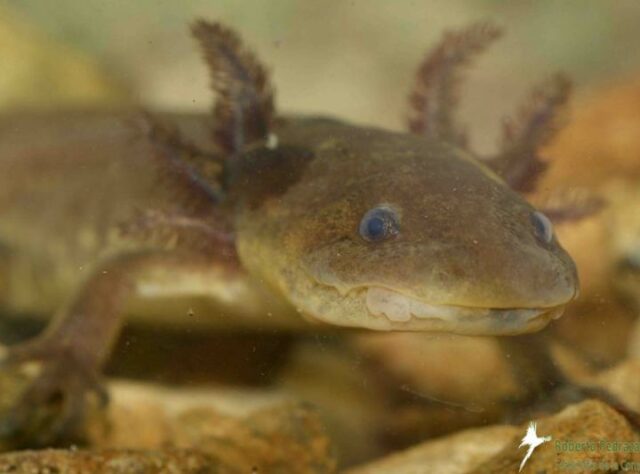 A monster-face akin to Dracula or a smiley friend? Viv Burton describes her enduring attachment to the Axolotl.

Axolotl is a short story written by Julio Cortázar in 1952. When I came upon it many years later it was to lead to a lifetime’s love for these ‘monsters of the stream’.

In the story the narrator is making one of his frequent visits to the Jardin des Plantes in Paris. He introduces himself as a “friend of the lions and panthers” but on this particular day he makes a detour to the aquarium where he finds himself enthralled by the Axolotl exhibit. He is captivated by the nine specimens and comes to connect with them on personal and psychological levels, which in turn becomes an obsession.

For most of the past 30 years I have kept and bred Axolotls. And far from thinking they are grotesque, I think the reverse. They have happy smiling faces and are a joy to watch. Maybe I am slightly obsessed as well.

Several years ago, when World Land Trust (WLT) began talking with Grupo Ecológico Sierra Gorda (GESG) about a potential project in Mexico my first question was: ‘Are there Axolotls?’

The Mexican Axolotl (pronounced ACK-suh-LA-tuhl) is a critically endangered species in the wild; they survive only in a few lakes and streams in a very small area of Mexico. Their habitats have been drained and contaminated, they have been collected for the aquarium trade and in the past roasted axolotl has been considered a delicacy. So, apart from their quirky looks, what makes them remarkable?

Living life as a juvenile

The Axolotl (Ambystoma velasci) is a salamander that spends its life in water. Through a quirk of nature it is neotenous, that is, it retains juvenile traits even into adulthood. While other amphibians undergo metamorphosis from egg to larva, and finally to adulthood (ie from tadpole to frog), the Axolotl remains in its larval form throughout its life.

Usually about 9 inches long when full grown, the Axolotl keeps its tadpole-like dorsal fin which runs along its body, and its endearing feathery gills which protrude from the back of the head.

In extremely rare cases, an Axolotl will progress to maturity and emerge from the water, but these individuals are short lived. Due to the importance of the Axolotl in scientific research, they are no longer collected from the wild and large numbers are bred in captivity. Research focuses on their amazing healing and regenerative abilities. Few animals have the capacity to re-grow a lost limb but Axolotls can, as I have seen for myself. One of my Axolotls lost a leg and then regrew it completely.

Some people dream of owning a sports car or being on television. Me, I wanted to see an Axolotl in the wild.

When I first met and talked with Roberto Pedraza, GESG’s Technical Officer, I realized that he could make my dream come true.

In 2011 John (Burton) and I visited Mexico to see the reserves that WLT supporters had, and are, helping create in the Sierra Gorda. And on one memorable day Roberto took us hiking in the forest wilderness to search for … yes, you’ve guessed … Axolotl. We found and photographed three beauties. It really was a dream come true.

Roberto sent us this photograph taken at an Earth Festival with his colleagues in GESG’s Environmental Education team. The theme was clean rivers and water, and characters included a toad, a beetle and an axolotl. All handmade they were a huge hit with children.

An Axolotl Update from Roberto Pedraza

Last week I received an email from Roberto:  “Yesterday was a most excellent day as we went in search of Axolotl in another creek in the highlands. And we found lots of them, in a single pond 15 big ones and babies included. There were different characters, from a mighty bull to more motherly faced ladies and even a local Dracula. As you know, this is an endemic-endangered species, so very nice to find such a healthy population and to take photos of them. Although the place is completely without protection the owner of the land is keen to protect them so I am hopeful that we will be able to work with him. After such a good day we toasted the Axolotls with our beer in the evening.”

Roberto is my Axolotl-hero so I will ignore the fact that he likened my favourite creatures to Dracula in the hope that when I’m lucky enough to visit Mexico again he will take me to see them.