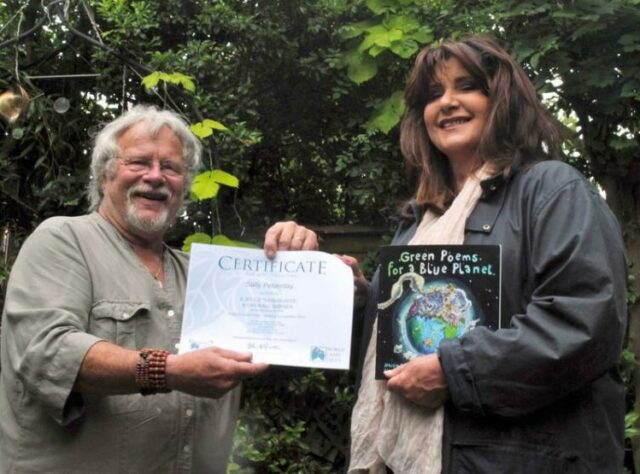 In May we announced that Sally Peberday had won World Land Trust’s (WLT) limerick competition. In June she received her prize, which was presented by Bill Oddie. She describes a memorable meeting.

I had a truly lovely day and it was great to meet Bill who was so generous with his time and fascinating to talk to. In some ways I felt I knew him already because of the public work he does to raise awareness of environmental issues, and his involvement with World Land Trust, but it was lovely to be able to speak to him in person.

I met Bill at his home where he presented me with the winner’s certificate, a copy of my limerick (framed), and Martin Kiszko’s book Green Poems for a Blue Planet, which I love. Bill made the presentation in the garden, under the watchful eye of a small army of gnomes.

Also with us was Chris Jenkin, Managing Director of Enterprise Plants (WLT’s longest standing corporate sponsor), who arranged the meeting.

“Bill made the presentation in the garden, under the watchful eye of a small army of gnomes.”
(Sally Peberday, Limerick Competition winner)

Once the prize giving was complete and photos taken, Bill showed us around his garden, describing in detail the various species of wildlife that frequent it. We chatted about our own observations of the effects of recent weather on frogs, bees and wildlife in general.

We continued our conversation over lunch at a little local restaurant. We had a delicious meal and time passed all too quickly. I really enjoyed the day and felt quite spoiled.

Please extend my sincere gratitude to Bill for his time and hospitality and to Martin for the beautifully illustrated and signed book, which I think is brilliant and will be much treasured. There are some very powerful poems in there!

Finally a big, big thank you to World Land Trust for running the competition, to Chris for being my chaperone, and of course to all the other competitors. There were many great limericks submitted, all equally deserving to win … but on this occasion I was the lucky one!