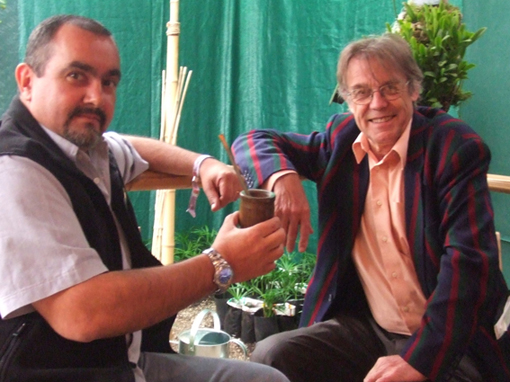 The 2013 National Geographic/Buffett Award for Conservation Leadership in Latin America has been awarded to Alberto Yanosky, Executive Director of WLT Partner, Guyra Paraguay.

The award is testament to Alberto’s outstanding work in furthering nature conservation in Paraguay. Established through a gift from the Howard G Buffett Foundation, this award recognises and celebrates conservation heroes.

World Land Trust (WLT) has been working in partnership with Guyra Paraguay for nearly a decade.

“I can’t think of a more deserving candidate,” said John Burton, WLT Chief Executive. “Over the past 10 years, we at World Land Trust have been proud to work alongside Alberto in support of his dedicated efforts to conserve Paraguay’s dry Chaco, the Chaco-Pantanal wetlands and the country’s remaining fragments of Atlantic Forest.”

Originally from Argentina, Alberto has been at the forefront of Paraguay’s conservation movement since 1993 and has been head of Guyra Paraguay since it was founded in 1997. Guyra Paraguay is the country’s leading conservation organisation and celebrated its 15th anniversary in 2012.

Alberto is active not only in Paraguay but across Latin America and internationally. He is a scientific author, speaker and international consultant. He serves on the boards of several international organisations, including BirdLife International, Waterbird Conservation Council for the Americas, and Western Hemisphere Migratory Species Initiative.

Under Alberto’s leadership, Guyra Paraguay has attracted funding of more than US$15 million for conservation in Paraguay.

One of Guyra’s many notable achievements is the Paraguayan Forest Conservation project to conserve ecologically diverse forests under imminent threat of clearance. WLT helped initiate this project and has provided ongoing support since 2009. The project has reduced emissions from deforestation, achieved significant benefits for biodiversity and local people, and is helping save the native forests of Paraguay.

1,000 hectares of forest cut down each day

In March 2013 a short film was released which describes the environmental damage caused by the growth of the agricultural sector in Paraguay, in particular the rapid expansion of soya bean production.

The film also outlines Alberto’s approach to halting this destruction by increasing the area of protected forest from 7,000 hectares to 20,000 hectares. To achieve this Guyra Paraguay is working in partnership with the indigenous Mbya Guarani tribe who live in and rely on the forest for their livelihood.

While some 1,000 hectares of forest are cut down each day in other parts of Paraguay to make way for cattle ranches and soya bean production, the film demonstrates that under Alberto’s leadership swift action to pre-empt land deals can save at least some of the forest.

One of the greatest challenges Alberto faces is to persuade government and opinion formers in Paraguay that the forest is as valuable an asset to the country as growing soya or raising livestock for the food industry.

Ecotourism is one way of creating sustainable business in the rainforest areas and WLT has been supporting Guyra’s efforts to develop an ecotourism sector in Paraguay.

The Three Giants Biological Station in the Chaco-Pantanal wetlands, for example, was largely funded by WLT Council Member Kevin Cox. The lodge provides visitor accommodation and takes its name from three resident giants that occur in the area: Giant Armadillo, Giant Anteater and Giant River Otter. (Pictured above is a Giant Anteater recorded on camera-trap at Three Giants at the end of May 2013.)

In 2012 the Award for Conservation Leadership also recognised a WLT partner organisation. The 2012 award was given to Pati Ruiz Corzo, founder of Grupo Ecológico Sierra Gorda (GESG), a Mexican conservation organisation dedicated to protecting a wide range of threatened habitats and their wildlife.

WLT’s support for conservation in the Chaco/Pantanal »

See for yourself Alberto’s conservation achivements and visit Paraguay »