Making a difference: volunteering in the Atlantic Rainforest SEARCH NEWS 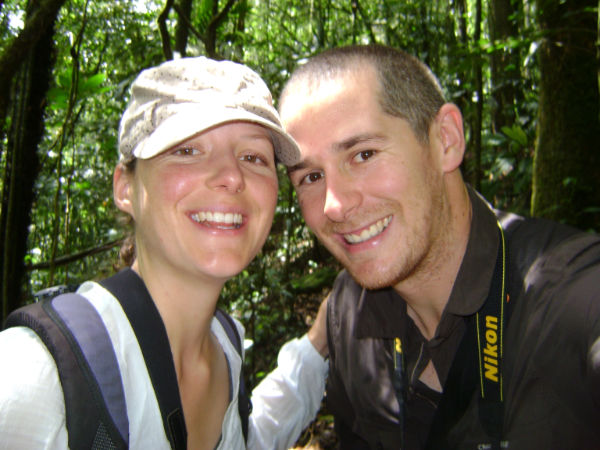 Siri Frost and Richard White of Newton Abbot in Devon decided to take the plunge and volunteer at the Guapi Assu Reserve in the Atlantic Rainforest of Brazil in September 2011. They had such a great experience that since then they have continued to spread the word about World Land Trust (WLT).  Here Siri explains why they chose to travel so far afield to volunteer.

We were inspired to volunteer at Reserva Ecológica de Guapi Assu (REGUA) in Brazil after researching lots of organisations offering volunteer opportunities.

REGUA stood out as a project with a diverse range of options for volunteers including forest and wetland restoration, cutting edge research, education, community involvement and tourism.

We were there for nearly two months, returning in November 2011, living in the volunteer’s accommodation, which is simple, as one would expect, clean and comfortable.

When we arrived we immediately had an opportunity to discuss our work programme. We willingly agreed to become involved in tasks ranging from photography to helping draft funding applications, education activities with local communities, and the necessary (but less exciting) requirements of daily routines such as  cleaning and maintaining the site laboratory.

Our photographic work was directed by Jorge Bizarro, REGUA’s Research Co-ordinator, and Alan Martin, World Land Trust Council Member, who were both keen for us to photograph the invertebrate life on both the Guapi Assu reserve and in forest that REGUA is hoping to acquire and protect in the future.

The reserve itself is a wonderful place to be – in the Atlantic rainforest overlooking the Tres Picos National Park, with wildlife all around.

“The reserve itself is a wonderful place to be – in the Atlantic rainforest overlooking the Tres Picos National Park, with wildlife all around.”

As well as the immense beauty and biological diversity of Guapi Assu’s wildlife, the highlight was being part of the sheer energy and drive with which Nicholas and Raquel Locke, the Directors, manage the reserve and all its associated activities.

On one occasion we ventured into the reserve’s primary forest area with Nicholas and Raquel and other volunteers and had an amazing wildlife experience. We were following the Red Trail when we encountered a group of Southern Woolly Spider Monkeys (or Muriquis). These large monkeys only occur in the Atlantic rainforest in Brazil and are classed as Critically Endangered. Here they were swinging high above us, with young clinging to their mothers. What a memory!

An equally abiding memory was finding a fascinating orange insect, possibly a tree hopper (Membracidae family), which was so extravagant in its appearance and a find we’ll always remember.

“Nicholas and Raquel Locke are absolutely committed to a vision of a world that embraces nature, and they are delivering this message with every ounce of their energy in ways that inspire others.”

As individuals we are very conscious of how our daily decisions affect our planet and we make daily choices to try to limit our impact. It was therefore hugely inspiring for us to meet and work with people like Nicholas and Raquel Locke. They are absolutely committed to a vision of a world that embraces nature, and they are delivering this message with every ounce of their energy in ways that inspire others.

With courage, vision and energy, REGUA and WLT show that it really is possible for individuals to influence and change perceptions for the better.

There’s nothing like positive stories such as those we witnessed at Guapi Assu to keep up the momentum and speak out about the challenges that an ever increasing human population, with such greedy demands, bring on our planet.

While in Guapi Assu we were incredibly impressed by a number of rangers, who have made a stand against tradition (some of them are featured on the WLT website and are funded through the Trust’s Keepers of the Wild programme).

“The rangers are brave and courageous individuals, willing to challenge the attitudes of the communities in which they live and work.”

Many of these rangers have turned from hunting wildlife to protecting it and in some cases they have been ousted from their communities. They are brave and courageous individuals, willing to challenge the attitudes of the communities in which they live and work and in doing so are bringing new perceptions locally.

The rangers rely on very basic equipment. We donated an old digital camera with rechargeable batteries so that a senior ranger could take photographs of the wildlife he sees, as well as recording evidence of hunting within the reserve.

We also wondered whether they might be able to purchase ‘snake boots’ at some point in the future – they currently wear ankle high wellingtons!

The perceptions of those that do not understand the aims of REGUA are gradually changing, with children from the local villages attending Young Rangers sessions and taking their enthusiasm and lessons home to their families.

On the day after our arrival, the Young Rangers took part in an organised cycle race which celebrated the children and their involvement in the reserve.

In our view seeing the project for ourselves – a project that previously we had only seen in photographs – made it very real.

“To contribute in person to such an exciting project felt very immediate, and actions always speak louder than words.”

It was great to see how donations really get to the people there and benefit different conservation activities. A visit brings a place alive, and can’t be communicated in pictures.

To contribute in person to such an exciting project felt very immediate, and actions always speak louder than words.

Staff at WLT have been very helpful and encouraging. If it hadn’t been for the Trust I’m not sure we would have realised our ambition to volunteer in South America in such a rewarding way. We hope we can continue to contribute positively to both WLT and REGUA.

Before we visited Guapi Assu, we organised a concert with a string quartet that I play the cello in. We distributed leaflets and raised £50, which we used to buy simple lab equipment to take with us, including specimen pots.

I also played the cello at our local village show and raised a small contribution to the project (with which we bought a memory card) and distributed leaflets to interested individuals.

On our return from Guapi Assu we gave a talk at the Bovey Tracey Local Wildlife Group showing a selection of Richard’s photos.

We hope to continue to raise awareness of WLT and of REGUA and to keep up our contact with Jorge Bizarro who provided us with so much support while we were in Brazil. We also hope to support Lee Dingain in his work on the REGUA website.

“And now, when someone asks us whether or not they should try overseas conservation volunteering, we say: Do it!”

We have found people are very interested in the work we have been involved in, particularly enjoying Richard’s photos. Several have asked about visiting REGUA and we very much hope they will. We’d like to think that in our small way we have encouraged others to support WLT and its projects.

And now, when someone asks us whether or not they should try overseas conservation volunteering, we say: Do it! Every penny counts and there is nothing more satisfying than knowing that, no matter how small the contribution, you are helping to make conservation projects, such as REGUA, an ongoing success.