What does it take to save an endangered species? SEARCH NEWS 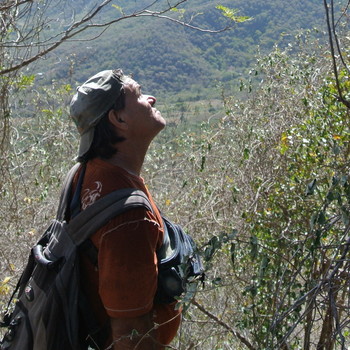 Bethan John meets wildlife ranger Pablo Antonio Millán on Margarita Island, off the coast of Venezuela, to find out more about the Yellow-shouldered Parrot.

Ranger Pablo finishes rolling his tobacco into a thin cigar, gets up from the great rock we’ve climbed, and disappears into the trees and towering cacti to see what he can find. The rock overlooks Margarita Island’s dry forest that stretches to the crystal blue sea.

As the rest of us relax in shade to avoid the sweltering midday heat, Pablo returns with a handful of bones and takes delight in showing us how the deer’s skeleton fits together.

Pablo’s knowledge of natural history is extensive and he enjoys revealing the secrets of the forest, having already gently poked a tarantula out of its webbed pocket, grinning broadly as we snap photos of this notorious creature.

For more than 20 years, Pablo has worked with local conservationists from Provita and his main role is to protect the island’s endangered Yellow-shouldered Parrot. In recent years his employment has been supported by World Land Trust’s (WLT) Keepers of the Wild programme.

The threats: from poaching to mining

Spread-out below our rock is an area called La Chica, on the western peninsula of Macanao. It’s the prime breeding ground for the parrots and home to more than 60 nests.

During the breeding season, Pablo spends his days and nights camped-out here for three months with a team of seven rangers. They watch the nests to prevent poachers from stealing the Yellow-shouldered Parrot chicks to sell them to the pet trade. It’s an ongoing struggle.

“Poachers see us doing surveillance but they still get in,” says Pablo. “We’re too few people working on this project and there are too many poachers.”

La Chica is not a protected area and sadly poaching is far from the only threat to the parrot. To reach the viewpoint on the rock, we first had to walk through a sand mining site, and amid the destruction of this habitat we saw many pairs of parrots, squawking loudly as they survey their potential nests for the up-coming season.

With the threats that face the Yellow-shouldered Parrot it can be hard to stay positive, but the following day Pablo takes us on an 11 hour hike to show what can be achieved by a small group of committed people working together.

“By the time we reach the peak of Macanao Mountain every bare patch of skin is crawling with ticks, we’ve met a rattle-snake basking in the sun along the way, and dodged a tarantula dangling mid trail.”

By the time we reach the peak of Macanao Mountain every bare patch of skin is crawling with ticks, we’ve met a rattle-snake basking in the sun along the way, and dodged a tarantula dangling mid trail.

On the last leg, Pablo takes a moment to conquer his vertigo before we emerge from the forest; a breath-taking panorama of the island opens up below us. We’re overlooking a 1,809 acre protected area – a safe haven for the Yellow-shouldered Parrots.

The Chacaracual Community Conservation Area provides an important lifeline for the endangered parrots and for years the local fishing community of El Horcón fought to save this land from destruction.

A mining company wanted to take over the community’s land and when the pressure became too much residents turned to Provita for help.

In 2009, with support from the World Land Trust, Provita was able to turn the community’s land into a protected area. The Venezuelan NGO continues to work with local people on environmental and social projects, aiming to create a brighter future for the island’s people and parrots.