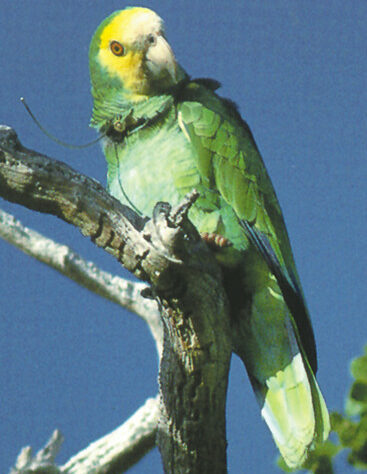 In Venezuela an island community is working with local conservation organisation Provita to protect the rare Yellow-shouldered Parrot.

Every year three million tourists flock to the tropical forests, crystal blue sea and white sands of Margarita Island, off the north coast of Venezuela.

But this is an island of two very different sides connected only by a thin strip of mangrove forests. Tourism is carving an ever increasing divide. As the east prospers, the poor communities of the west deal with the fallout.

As people descend on the popular beaches in the east of island, every year the poverty-stricken fishing communities of the western Macanao Peninsula must pay for more water to be delivered from the mainland because of shortages.

During a busy tourism season, food outlets in the east have nowhere to dispose of their waste so they dump it on the western shoreline.

Mining companies are a strong force across the island. They supply the construction industry with raw materials to build more hotels in the east, and it is these tourist developments that are devastating the habitat of the island’s endangered Yellow-shouldered Parrot.

Land saved for people and parrots

For years, the local fishing community of El Horcón, in the Macanao Peninsula, fought to save their land from destruction by mining companies who wanted to take it over.

When the pressure became too much they turned to local conservation group, Provita, for help. In 2009, with the support from World Land Trust (WLT), Provita was able to turn the land into a protected area.

The Chacaracual Community Conservation Area now protects 1,809 acres of dry forest. As well as safeguarding this land for the people of El Horcón, the biodiverse habitat is a lifeline for the Yellow-shouldered Parrot, an endangered species on the island.

There are thought to be fewer than 10,000 Yellow-shouldered Parrots left in the wild, with Margarita Island being the population’s stronghold.

It’s far from easy; many people on the island poach the parrot chicks, either to keep as pets (a Margaritan tradition), or to sell to the illegal pet trade.

Provita provides social support for El Horcón, with an emphasis on environmental and community benefits. For example, one project gives residents the skills and equipment to grow vegetables, such as Margaritan varieties of sweet pepper.

Provita staff have also created hiking, bird watching and trekking routes through the reserve and are running workshops to train local people as tourist guides.

By providing alternative income and showing how natural resources can be used sustainably, Provita hope that local people will turn away from poaching the endangered parrots and instead see them as vital to their livelihood – and a treasure in their own right.

Provita’s work is already showing signs of success. The Yellow-shouldered Parrot is becoming so important to the islanders’ culture that every year they throw a festival in its honour. The celebration is beautiful symbol of a changing mind-set, heralding a brighter future for the island’s people and parrots.