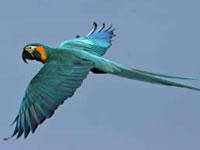 In April Joanne shared her experiences of the reserve with Ruth Canning, WLT’s Conservation Programmes Manager (Americas Region) and WLT Council Member, Kevin Cox. In general, bird numbers seem to be fluctuating, which is a concern, but mammal populations, on the other hand, seem to be either stable or actually increasing.

“The Beni is phenomenal for wildlife, a unique endemic habitat, found nowhere else in the world. We need to protect as much of this habitat as we can now before it’s too late.”
(Joanne Kingsbury, Glasgow University Expedition Leader)

The extension to the reserve, which WLT is raising funds for through the Buy an Acre fund, includes 26 isolated forest islands and 3 large forest islands within this savanna habitat.

These forest islands are crucial habitat for a host of species particularly the endangered Blue-throated Macaw. Larger islands are important to the macaws for foraging, and smaller ones are thought to be safe havens for roosting and nesting.

Extending the reserve will offer more potential breeding areas for the species, as well as additional areas of tall grass savanna, vital for several of the reserve’s threatened grassland birds.

“The Beni is phenomenal for wildlife, a unique endemic habitat, found nowhere else in the world and we need to protect as much of this habitat as we can now before it’s too late,” says Joanne who fears that more road and bridge building would be disastrous. “If better roads went in, that would be the beginning of the end for the habitat and its wildlife.”

The Motacu palm grows on Beni’s forest islands. These occur on areas of high ground where tree roots escape seasonal flooding. The islands vary in size from a few square metres to square kilometres and the difference in elevation between flooded regions and forest is often only a metre or so.

The Blue-throated Macaw depends for its survival on the forested islands of the Beni savanna. Buy an Acre in Bolivia and help save this magnificent bird. © Joe Tobias.

The Blue-throated Macaw (Ara glaucogularis) is Critically Endangered (IUCN 2013), with estimates of between 100-400 left in the wild. It is endemic to the Beni savanna of Bolivia and very little is known about its ecology or behaviour.

Its range overlaps with that of the Blue and Yellow Macaw. Both macaw species are frequently spotted foraging in Motacu palms on the larger forest islands of the reserve during the day.

At dusk, both species congregate at a number of specific pre-roost aggregation sites and then fly off in large groups, presumably to roost in areas outside the reserve.

The islands appear to be important congregation or ‘stop-off’ points for macaws coming in from other islands at dusk. Blue throat feathers were found in some of the smaller islands, which raises the question could these be roost sites?

In 2009 the expedition had 10 old fashioned manual camera traps that took pictures with mounted disposable cameras. The quality was poor and the photos were prone to damage.

With subsequent funds raised via grants from bodies such as the Royal Geographical Society and Carnegie Trust for Scotland, the expedition team now has 26 brand new digital traps. The digital traps have captured some phenomenal shots and videos of the reserve’s more elusive wildlife, and are enabling population trends to be monitored.

The traps are positioned in pairs along bush trails, near watering holes or in areas where animal signs are present (tracks, scat etc).

Camera-trap pictures of Puma (Puma concolor) were first captured in 2010, a big male feeding on a Capybara. Later, further pictures showed a female with two cubs. Evidence of breeding on the reserve is encouraging to see, specifically in large predatory species that are top of the food chain, indicating that the ecosystem is healthy enough to support new life. Adult Puma populations have since remained stable on the reserve with 2 individuals recorded in both 2011 and 2012.

Likewise, images of Ocelot (Leopardus pardalis) were first captured in 2010. On a positive note, adult ocelot populations seem to have increased on the reserve with: 2 individuals recorded in 2010, 3 in 2011 and 4 2012

In 2012 the Near Threatened (IUCN 2013) Pampas Cat (Leopardus colocol) was recorded on camera-trap for the first time. The Pampas Cat is currently in decline across the South American continent due to habitat loss to make way for agriculture and stock grazing. This record of the pampas cat is important, both for the reserve and for the Beni, as it has not been formally recorded in this region before.

Giant Anteaters and other mammals

Other mammals monitored include:

Joanne believes that fluctuations in numbers of these species are likely to be linked to grassland succession – specifically patterns in the frequency of grassland wildfires.

Periodic wildfires are a normal part of the Beni’s ecology and an important in maintaining the savanna’s biodiversity. However, fire frequency in the Beni may be unnaturally high as fires, which are often set by ranchers to stimulate new grass growth for their cattle, tend to rage out of control and sweep across more wild parts of the region.

Protecting stands of tall grassland on reserves like the Barba Azul will therefore be paramount for protecting these endangered birds.

Joanne Kingsbury finished her degree in 2011 but has continued to be involved with Glasgow University and worked with student expedition leaders to organise the 2012 expedition to the reserve. She is currently working for RSPB in Scotland.

Detail of the expedition findings:

The conservation of Beni’s natural landscape – in particular the forested islands – means the likely survival of the Blue-throated Macaw and other endangered species. Please help save more Beni savanna land by donating to Buy an Acre.