‘Only a cactus’ but critically endangered all the same SEARCH NEWS 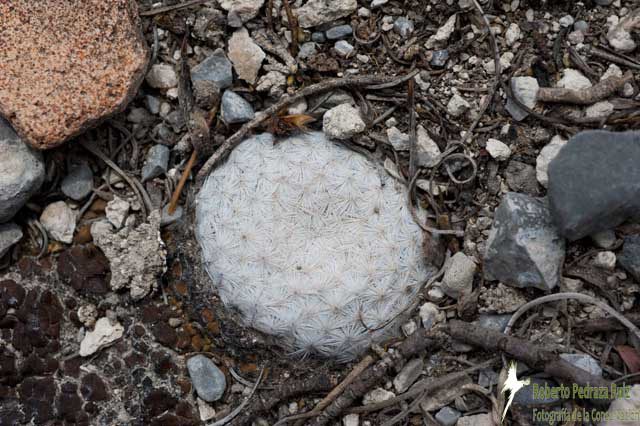 Although not the most glamorous of plants, Mammillaria herrerae, commonly known as Golf Ball cactus, is a critically endangered species clinging to survival in the high mountains of Queretaro south of Sierra Gorda in Mexico and found nowhere else on earth.

This small white cactus is endemic to just two small areas of Queretaro that are, to Roberto’s regret, outside the borders of the Sierra Gorda Biosphere Reserve.

Roberto was accompanied by colleagues from Cadereyta Botanical Garden, one of whom has spent years studying these plants. The visit was specifically arranged so that Roberto could photograph the cactus in its natural habitat, and the botanists were shocked to find far fewer examples than on their previous visit.

“Collectors have been active,” Roberto explains. “They flock to the area, pay tiny amounts of money to locals to guide them and then they take the plants away!”

On the brink of extinction

Although these sought-after cactuses, which have startling pink flowers, are available through the horticultural trade, they are on the brink of disappearing from the wild.

The species prefers high desert (between 1,900 and 2,300 metres above sea level), where they grow in thin soil on ultra steep slopes. In such difficult terrain, photographing them was never going to be easy but Roberto has been climbing the sierras for most of his life.

“Collectors have been active. They flock to the area, pay tiny amounts of money to locals to guide them and then they take the plants away!”
(Roberto Pedraza Ruiz, GESG)

Because he missed the cactuses in flower, Roberto plans to return in February 2014, in the hope of capturing them in bloom, but he is prepared to be disappointed. “It is perfectly possible that by next year the cactus will no longer be there,” says Roberto.

IUCN’s Red List records just 50 Mammillaria herrerae survive in the wild. According to Roberto, the number may be nearer 400, but it is nonetheless a small population that is vulnerable to collecting.

World Land Trust’s mission is to purchase and protect land that is rich in biodiversity. By donating to the Trust’s Buy an Acre appeal you can help protect species that are on the brink of extinction.