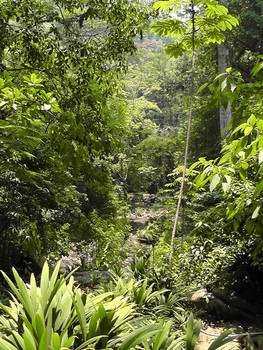 FUNDAECO, World Land Trust’s conservation partner in Guatemala, has been awarded a grant of £269,445 from the UK government’s Darwin Initiative.

The grant will be spread over three years and will enable FUNDAECO to build on existing conservation initiatives in the tropical rainforest of Caribbean Guatemala, which World Land Trust (WLT) has been supporting since 2008.

“First of all, WLT forwarded information to FUNDAECO about the call for proposals from the Darwin Initiative,” he explained.

“Second, thanks to the visit we made to the British Ambassador during John´s visit to Guatemala in 2012, we were able to show evidence of communication with the Foreign and Commonwealth Office in the project country, which was one of the application criteria.”

Marco went on to say: “Through this support, FUNDAECO has greatly benefitted from being a member of the global network of WLT partners.”

Ruth Canning, WLT Conservation Programmes Officer (Americas Region) recently attended a Darwin Initiative workshop on behalf of FUNDAECO. She commented: “This is a fantastic achievement for FUNDAECO. This support will greatly help Marco and his team to consolidate and develop their vitally important conservation work across Caribbean Guatemala.”

WLT has supported the creation of nature reserves across Caribbean Guatemala, and the grant from the Darwin Initiative will allow FUNDAECO to scale-up its efforts and apply lessons learned across the region.

“FUNDAECO has greatly benefitted from being a member of the global network of WLT partners.” (Marco Cerezo, Director General of FUNDAECO)

FUNDAECO will spend the grant on programmes to reduce deforestation in Caribbean Guatemala through:

The Darwin Initiative is coordinated by the UK’s Department for Environment Food and Rural Affairs (DEFRA) and has invested more than £80 million in areas of particularly rich biodiversity since its founding at the Rio Earth Summit in 1992.

By funding  collaborative projects which draw on UK biodiversity expertise, the Darwin Initiative aims to help countries meet their objectives under one or more of the three major biodiversity Conventions: