Chessington Conservation Fund (CCF) is supporting a ranger in Ecuador in partnership with World Land Trust (WLT) and Nature and Culture International (NCI).

Chessington Conservation Fund (CCF) was set up to raise money to help protect the future of nature and wildlife through conservation work and education at Chessington Zoo in Surrey, in the local community and worldwide.

In 2012 the CCF raised funds for WLT to support the purchase of land in Ecuador that was equal in size to the site of Chessington World of Adventures: 128 acres (51 hectares).

Thanks to CCF’s donation, Nature and Culture International, WLT’s conservation partner in Ecuador, was able to extend the Cazaderos Forest Reserve in the threatened Tumbesian forests of south-western Ecuador.

The reserve protects the dry forest habitat of Mantled Howler Monkey, peccary, deer and puma. Boa Constrictors are also found here; native to the Americas these large snakes are been severely depleted by predation from humans and other animals, and over collection for the exotic and snake skin trades. The reserve is also home to many of the most threatened bird species of the region.

Since making an initial donation for land purchase in 2012, CCF has provided additional funds to support the employment of a ranger, Guilbert Hernando Olaya Aponte, to help protect the reserve in 2013.

Guilbert was born in the Cazaderos area and has been working as an NCI ranger for nearly two years.

Guilbert’s daily work is divided between various tasks. Every 15 days throughout the year he records phenological information (growth, bloom and fructification) of 15 native tree species inside the reserve.

In the past two years, with funding from San Diego Zoo, NCI has developed a research project investigating the impact of cattle on forest dynamics. Guilbert´s collaboration was and is very important in terms of selecting the areas, installing the plots, identifying the species and collecting data.

In addition Guilbert maintains fences on the reserve and he is also in charge of a 1,977 acre area (800 hectares) that has been fenced to enable a study of forest dynamics undisturbed by cattle or goats.

A long history of human activity has resulted in a dramatic loss of dry forest habitat in the Tumbesian region of northern Peru and western Ecuador. Today just 1 per cent of the original forest survives. However, despite widespread forest habitat loss and degradation, the region retains its outstanding wildlife value.

In the Cazaderos Forest Reserve, Guayacan trees (Tabebuia chrysantha) provide an extraordinary annual spectacle at the turn of the year.

The trees are commonly known as Golden Trumpet Trees. During the dry season, they are completely bare of leaves, and then, a week or so after the first heavy rain, usually in December, January or February, thousands of them bloom simultaneously and overnight they are covered with millions of bright yellow flowers. The flowering happens just once a year and lasts just five or six days. The flowers start falling immediately and form a yellow carpet on the ground.

World Land Trust’s Ecuador Rainforests Project helps safeguard diverse wildlife in an area where over 80 per cent of the tropical rainforests have already been destroyed, leaving many species globally threatened.

Buy an Acre in Ecuador »

World Land Trust works with zoos and aquaria though its Wild Spaces programme, and it supports the employment of rangers through its Keepers of the Wild programme. 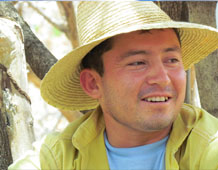 Chessington Conservation Fund (CCF) is supporting a ranger in Cazaderos Reserve in southern Ecuador for the second year running, in partnership with … 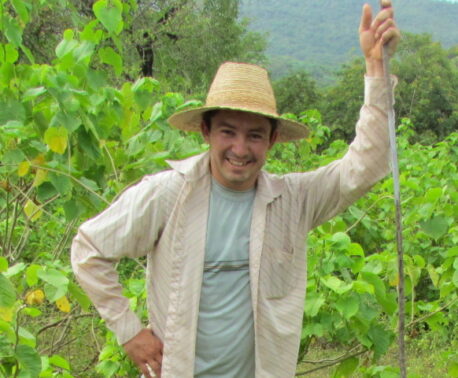 Important research and site mapping is ongoing, and constant patrolling keeps illegal hunting and logging in check, says Keeper of …