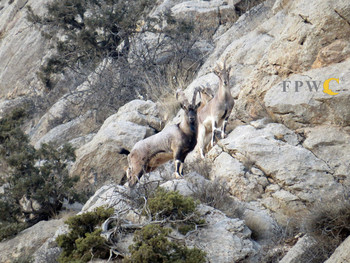 Recent field reports suggest that numbers of Bezoar Goats are increasing in the Caucasus Wildlife Refuge, as a result of site protection measures.

Thanks in part to the work of wardens funded by World Land Trust (WLT), the Caucasus Wildlife Refuge (CWR) in Armenia has become a safe haven for wildlife.

Despite the fact that Bezoar Goats are still hunted illegally in the Caucasus region, rangers report that herds numbering up to 30 goats are now regularly seen inside the reserve.

Patrols and other security measures are proving effective. In February, keepers at the reserve who are on duty 24 hours a day spotted the lights of night hunters on the Dahnak Mountain. Following a concerted effort with staff from the neighbouring Khosrov Forest State Reserve, two poachers were arrested and their guns confiscated.

Alongside this positive news is a reminder that there is still much to be done. Rangers were saddened to find a dead lynx in an area adjacent to the CWR project area, near the ranger station at Dahnak Mountain. An examination of the body indicated that the animal had not been shot, but caught in a trap from which it had tried to escape.

On another occasion a mature male Bezoar goat, suffering from a gunshot wound, was seen entering the Caucasus Wildlife Refuge from the Khosrov reserve. Because of their magnificent horns, male Bezoar Goats are prized among trophy hunters.

Since 2010, World Land Trust (WLT) has been working with Armenian conservation organisation, Foundation for the Preservation of Wildlife and Cultural Assets (FPWC), which manages the Caucasus Wildlife Refuge.

‘For top predators such as the Caucasian Leopard, the Wildlife Refuge is an attractive habitat because it shelters populations of prey species such as the Bezoar Goat.’
(Marc Hoogeslag, IUCN-NL)

‘The confirmed presence of the leopard shows that the Caucasus Wildlife Refund is increasingly becoming a safe haven for flora and fauna,’ explains Marc Hoogeslag of IUCN Netherland’s (IUCN-NL) Purchase of Nature Programme. ‘For top predators such as the Caucasian Leopard, the reserve is an attractive habitat because it shelters populations of prey species such as the Bezoar Goat.’

Both WLT and IUCN-NL provided funds to help set up the Caucasus Wildlife Refuge. WLT continues to fund wardens in the refuge through the Keepers of the Wild programme. In September 2012, WLT launched the Caucasian Leopard Special Appeal to raise further funds.

So far, funds from the special appeal have been used to extend the area under protection and to supply camera-traps and other equipment to aid the rangers in their work.

Gor Hovhannisyan, one of the CWR keepers, explains the importance of this assistance: “Thanks to modern technologies such as trap cams, photo cameras and lamps, we are able to protect the area better. Good equipment really makes the difference.  Even a huge lamp which we use up on the hill is visible for several kilometres around the rangers’ station. This makes everyone more conscious.”

FPWC is also creating a Leopard Project database. Data forms have been designed to collect information about leopard sightings in rural areas of Armenia. Data collection is under way.