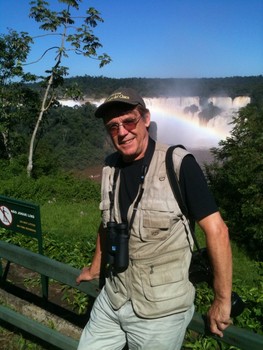 John was nominated for the award by Rohini Finch, WLT’s Chair of Trustees, who said: ‘John has been a leading light in the UK’s international wildlife conservation movement for more than 40 years. He has never hogged the limelight, but has been amazingly successful.’

Following his early career as a natural history writer and journalist John became Friends of the Earth’s first wildlife consultant in 1971.

While at FFI John became the first Chairman of TRAFFIC, the wildlife trade monitoring organisation, setting up its first offices in London and Cambridge.

He also formed the project that was to become the Bat Conservation Trust (of which he was the founding Chairman).

However, his greatest conservation achievement was yet to come.

In 1989, having left FFI, John became involved with a new land protection initiative, Programme for Belize, and established a charity, with his wife Viv, to raise funds to help save a large area of tropical forest in Belize.

‘John is passionate about the work of the World Land Trust. He has built up a very effective team and he has devoted himself to making the Trust the success it is.’ (Rohini Finch, WLT Chair of Trustees)

Two years later, the charity embraced new projects and became the World Land Trust (WLT). WLT’s objective was to set up a global network of trusted conservation partner organisations and, through those partners, to help buy and manage land crucial for the survival of threatened species and habitats.

‘John is passionate about the work of the World Land Trust,’ explains Rohini. ‘He has built up a very effective team and he has devoted himself to making the Trust the success it is. John has a unique philosophy of how WLT should operate. He believes that in order to make real long lasting change within a country the Trust should work together in true partnership with local NGOs and local communities.’

Since 1989, under John’s leadership, WLT has raised more than £19 million for conservation and secured the future of more than 500,000 acres of vital wildlife habitat in Africa, Asia, Central and South America and Eastern Europe.

‘John has a unique philosophy of how the Trust should operate. He believes that in order to make real long lasting change within a country the Trust should work together in true partnership with local NGOs and local communities.’ (Rohini Finch, WLT Chair of Trustees)

In 2012 John helped WLT achieve what he himself described as ‘probably the most important land purchase WLT will ever make, because of the innovations involved and the wealth of biodiversity it protects’.

After several years of effort involving a partnership with indigenous Guarani Indians and two Argentinian conservation organisations, almost 10,000 acres of tropical forest in Misiones was secured for conservation, linking up much larger areas of forest now in conservation management.

John has continued to write throughout his career and has published more than 40 books on wildlife. In 2012, in recognition of his conservation initiatives, University of East Anglia and University of Essex awarded John an honorary doctorate.

Charity Staff Foundation is the only UK charity providing dedicated support to people who work or volunteer in the charity sector. Rohini accepted the award on John’s behalf at the Charity Staff & Volunteers Awards Ceremony on 7 March 2013.