Guest Blog: The plight of the bumble bee SEARCH NEWS 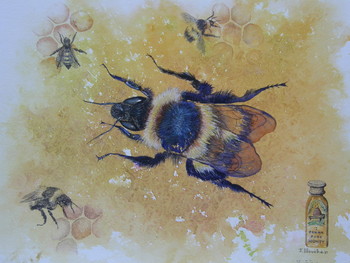 Julia Barnes visits WLT gallery’s current exhibition Birds & Bees and asks if anything can be done to stem the decline of the honey bee.

In this interminable winter of iron grey skies and freezing temperatures, an exhibition, entitled Birds and Bees at World Land Trust (WLT) gallery, gives us hope that summer will come again.

But what makes this exhibition unusual is the close links with the bee-keeping community local to the gallery in Halesworth: the exhibition includes displays about beekeeping provided by Bungay Community Bees, and honey produced by Leiston and District Beekeepers Association is on sale in the gallery.

These people are passionate about their work with bees, and the importance of bees in their natural habitat. For them, the sound of buzzing bees is not simply the soundscape of an idyllic summer’s day, it symbolises a vitally important link with nature.

There are 20,000 species of bees worldwide and a staggering one-third of human nutrition depends on insect pollination, most of which is done by bees. But now bees are facing their biggest challenge as they are threatened by loss of habitat, climatic change, pesticides and disease.

Honey bee populations, in particular, have declined dramatically, and a phenomenon known as colony collapse disorder (CCD) has decimated bee populations in North America, in parts of Europe and in the UK. First noted in 2006, CCD – when worker bees suddenly desert their hives – is becoming more widespread, and is a matter of huge concern to beekeepers.

Despite on-going research, there is no single explanation as to why this is happening; malnutrition, parasite infestation, pesticide poisoning, exposure to a virus, or to genetically modified crops have all been identified as possible causes.

Bee-keepers are campaigning to raise awareness. Radio 4’s World At One presenter Martha Kearney has a bee blog – and a number of organisations, such as the UK’s Co-Operative Society, are involved in trying to combat CCD and to create a better environment for honey bees.

WLT focusses a great deal of attention on saving tropical forests, savanna and mangrove habitats where many species of plants and animals would simply not survive if bees were missing.

Other WLT project areas combine woodland and flower rich meadows, which provide a haven for bees. Wild flowers supply nectar and pollen, and hollow trees provide a dry, dark cavity space in which bees can fix their comb. Bees also need a nearby water source; they use water to cool the hive and to dilute honey for feeding their young.

Two such sites supported by WLT spring to mind.

One is the Caucasus Wildlife Refuge in Armenia, where flower rich meadows cover the south-western slopes of the Geghama mountains. With support from World Land Trust, the Foundation for Preservation of Wildlife and Cultural Assets has put in place education programmes to put a stop to unsustainable methods of plant gathering in Armenia, which present an increasing threat to important wildlife habitat.

The other site is Kites Hill, WLT’s only project in the UK, an area of ancient beech woodland and pasture. At this site, with support from World Land Trust, the Conservation Volunteers (TCV) maintain the woodland’s health and structure and keep the fields in organic management. With help from volunteers, a pond was created in 2009.

For once, there is no argument as to why we should make the effort to save our bees. Despite all the technological advances we have made, nothing has replaced these amazing pollinators – and the simple truth is, we cannot do without them.