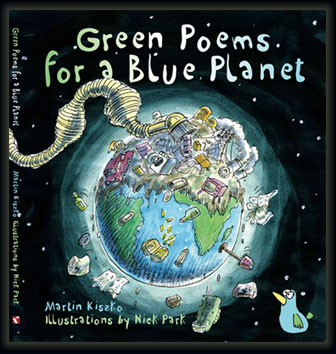 World Land Trust (WLT) is delighted to announce that Martin Kiszko will be joining Bill Oddie and Simon Barnes on the panel of judges for the Trust’s limerick competition.

Martin Kiszko is a composer, screen writer, and author of Green Poems for a Blue Planet.

Martin tours nationally and internationally as the ‘UK’s Green Poet’, taking an environmental message into schools and festivals. “Children and families are captivated by the way in which important environmental issues are communicated in a light hearted and creative way,” Martin explains.

Green Poems for a Blue Planet is illustrated by Nick Park, creator of Wallace and Gromit. According to Martin, the poems are intended to “start a conversation, spur us into action, or simply turn on a few ‘green lights’”.

On being invited to join the judging panel, Martin responded in verse:
There once was a limerick judge,
Who penned all of his poetry on fudge.
As he chewed on the verse,
At his dentist he cursed –
‘My bardic back molars won’t budge!’

“Martin believes there is always room for the new presentation of subject matter, which is exactly the rationale for WLT’s limerick competition,” said Christina Ballinger, WLT’s Writer / Editor, who is coordinating the competition. “We are very pleased to have him on the judging panel, and we hope that the limerick competition will be a spring board for an on going association.”

The World Land Trust Limerick Competition was launched by WLT gallery in January to coincide with an exhibition of prints by artist and poet Edward Lear. Entries must conform to the established five line limerick format, and the theme should broadly reflect WLT’s mission, history or activities.

The closing date for entries is noon on Friday 5 April 2013 (British summer time).