Cast your vote to protect the Palkachupa Cotinga! SEARCH NEWS 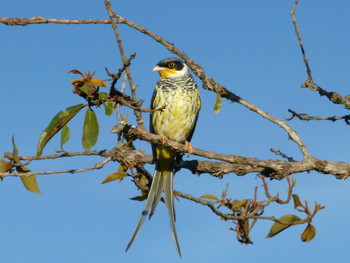 The fate of the Palkachupa Cotinga (Phibalura boliviana) is in our hands, now that a project to conserve its habitat has been shortlisted for a public vote.

The vote is organised by the European Outdoor Conservation Association (EOCA), which every year funds three conservation projects.

The proprosal to secure habitat for the endangered Palkachupa Cotinga has been put forward by World Land Trust, which supports conservation efforts in Bolivia in partnership with Asociación Armonía.

Vote for the Palkachupa Cotinga

For nearly a hundred years, the Palkachupa Cotinga was thought to have died out, and its rediscovery in 2000 has galvanised conservation efforts to save the species.

The bird is endemic to the Andean Cerrado woodland ecosystem in north western Bolivia where its population is estimated at fewer than 600 individuals.

The deforestation and fragmentation of the Andean Cerrado, due mainly to the expansion of agriculture and cattle ranching, is proving disastrous for the Palkachupa Cotinga.

Less than 20 per cent of the Andean Cerrado woodland ecosystem now remains, and while habitat clearance continues, time is running out.

However, with swift action to purchase land to create a Palkachupa Cotinga reserve, this precious species may yet survive.

The projects that win the most votes will receive funding of €30,000 euros from EOCA. This funding will enable Asociación Armonía to expand its existing 130 acre Andean Cerrado reserve by a further 158 acres, to reforest degraded areas, and to involve schools and members of the local community in tree planting and other conservation activities.

World Land Trust is calling on its supporters to vote for the Palkachupa Cotinga!

The Palkachupa Cotinga project is nominated in the Alpine category of EOCA’s project vote.

More information on projects in this category »