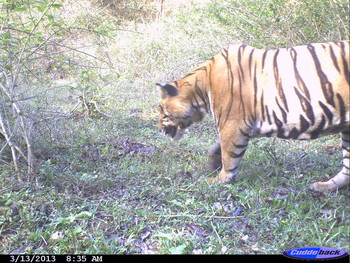 The pictures are a positive indication of the success of the Tirunelli-Kudrakote corridor, which runs through the Wayanad district of Kerala in southern India.

So far in 2013, camera-traps have recorded two different tigers in the corridor. One picture taken in March in Kotapaddy (top right), shows an adult male in very good health after predating a Gaur (Indian Bison).

Another picture, taken earlier in the year, shows an adult tiger in Pulayankolly (bottom right). Although the sex of the animal is unknown, it is also clearly in good health.

In 2012, a third tiger (a different individual) was also photographed in Kotapaddy in the summer.

“We are all very pleased to see the increased usage of the corridor by a wide range of animals and capturing these tigers on film is very exciting,” said Sandeep kr Tiwari, Deputy Director at Wildlife Trust of India (WTI), WLT’s conservation partner in India.

In a landscape dominated by humans, secure wildlife corridors provide a wider area for animals to roam safely. This in turn increases the animals’ prospects of survival and reduces human-wildlife conflict.

“It’s really satisfying to see the unhindered movement of animals (tiger, elephants, gaurs, etc) through the corridor, post securement,” explains Sandeep. He is confident that the success of the Wayanad corridor will encourage and strengthen WTI’s commitments to work towards securing other critical bridges between reserves.

The camera-traps were set by Ramith Meledath, a WTI field biologist working on the Wayanad corridor securement project. He describes some of the animals that have been sighted: “Elephant herds and solitary bull elephants are frequently using the corridor. The corridor is also used by animals like Sloth Bear, Leopard Cat, Jungle Cat, Barking Deer, Mouse Deer, Spotted Deer, Sambar Deer, mongooses, monkeys etc. The camera trapping also shows that secured areas in the corridor are facilitating new territories for individual tigers.”

Above left, a map showing three wildlife corridors in India supported by WLT. Above right, a map of the Kerala corridor showing villages between Kudrakote and Tirunelli. Tigers have been recorded in Kotapaddy and Pulayankolly. © WTI.

World Land Trust has been working with WTI for a decade to create protected corridors that connect existing forest reserves in India. WLT’s primary focus is securing land for elephants, because by providing habitat for a ‘flagship’ species like the Asian elephant, wildlife corridors benefit a huge range of other creatures, including the tiger.

The Tirunelli-Kudrakote  corridor was the second one secured by funds raised by WLT and our partner IUCN-Netherlands and also Elephant Family. The first corridor was the Siju-Rewak corridor in Meghalaya in the Garo Hills of NE India.

Following the success of the corridors to date, WLT is raising funds to create a wildlife corridor in Uttarakhand in northern India, between the Corbett National Park protected area and the neighbouring Ramnagar forest, where there is increasing conflict between tigers and humans.

You can support the India Elephant Corridors Appeal by donating to WLT’s Action Fund and specifying Elephant Appeal in the comments box.